Make Me Read It Readathon - Announcement and Poll 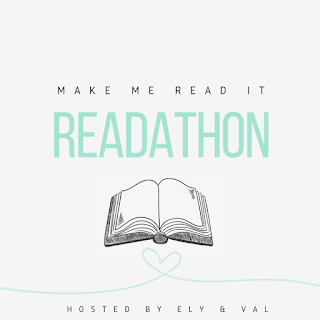 Happy Thursday everyone!  This is my sign up post for the Make Me Read It Readathon, hosted by Ely @ Tea and Titles and Val @ The Innocent Smiley.  I remembered seeing readathon around the blogosphere last year and I thought I'd take part this year (the readathon's third year) for the first time.  It begins midnight wherever you are on August 6th and goes through to August 13th.


Look at the books you own, either physical, e-book or ones you've borrowed from the library and pick out a few you really want to read, or feel like you should read. It’s up to you how many you pick, personally I'd pick a few more than you expect to be able to read in a week. Example: if you think you’ll only read two, pick out five books or if you think you can read seven, pick out ten.

Make a list of these books on your blog, or make a video, or a Goodreads shelf or post a picture on Instagram—whatever is easiest for you. Then get friends, other bloggers/ booktubers/ bookstagrammers etc. to vote on which books you HAVE to read.

When the readathon comes along, you read the books in the order of most votes. For example, if one book gets 10 votes—you read that first, then the one that got 7 and so on. If there's a tie, then it's your preference. The goal is to read as many as possible. 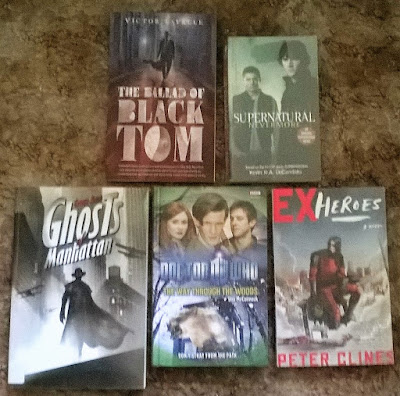 The books I hope to tackle during this readathon have been on my shelf for quite a while now.  It's high time I finally knock them of my mountainous tbr!

The Ballad of Black Tom by Victor LaValle - This novella is a Lovecraft inspired horror fantasy set in the 1920s New York.

Nevermore (Supernatural #1) by Keith R.A. DeCandido - You might already know that Supernatural is one of my favorite tv shows.  In fact, I've read another one of the tie-in novels (One Year Gone, which was number seven and it pretty good actually, if a bit different) and I recently got a hold of the first book in the series.  It takes place during season two of the show right after Crossroad Blues.

Ghost of Manhattan (The Ghost #1) by George Mann - This decopunk novel also features an alternate Roaring 20s and it sounds like it has a fun mystery.  Some of the reviews I've seen haven't been so great, but I'd still like to try it out.

The Way Through the Woods (Doctor Who: New Series Adventures #45) by Una McCormack - I've heard a lot of good things about this series six set Doctor Who tie-in novel.  It sounds like it'll be a creepy one too alternating between 2011 and 1917.

Ex-Heroes (Ex-Heroes #1) by Peter Clines - I loved this authors novel The Fold and this series started sounds like it could be fun - flawed superheroes vs. zombies, bring it on!

Now it's your turn to decide what I'll be reading and in what order, so let's get to the poll!

What Should I Read?


Thanks for voting!  I'm looking forward to seeing what I'll be reading during the readathon!