On Friday's I take part in three weekly link ups - The Friday 56, hosted by Freda's Voice, Book Beginnings, hosted by Rose City Reader, and 50/50 Friday is a new weekly link up and it is hosted by Carrie @ The Butterfly Reader and Laura @ Blue Eye Books. For The Friday 56, you choose a book, a book you have just finished, a book you are about to start, your current read, and share a line or a few lines that grab you (but don't spoil anything) from page 56 or 56% of the way through the ebook. Post it and share your post's url on Freda's most recent Friday 56 post. As for Book Beginnings, you share the first sentence or so and your initial thoughts, impressions, or whatever else it inspires, and then link up your post's url with Rose City Reader. Then, for 50/50 Friday, every week there's a new topic featuring two sides of the same coin - you share a book that suits each category and link up on the hosts blogs. 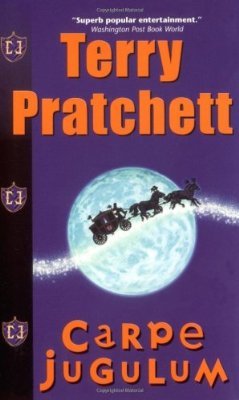 This week I'm spotlighting one of my Beat the Backlist reads that I just finished up, Carpe Jugulum (Discworld #23) by Terry Pratchett.  It was great to be back in Discworld - and to have crossed off one of my backlist titles.

Through the shredded black clouds a fire moved like a dying star, falling back to earth-
-the earth, that is, of the Discworld-
-but unlike any star had ever done before, it sometimes managed to steer its fall, sometimes rising, sometimes twisting, but inevitably heading down.

Nanny grabbed her cat off the throne.

Most - The Four Horsemen of the Apocalypse from Good Omens by Neil Gaiman and Terry Pratchett - They're already their own gang!

Least - Aziraphale from Good Omens by Neil Gaiman and Terry Pratchett - I can't even imagine Aziraphale doing this at all.  Crowley on the other hand though is a different story.

What are you reading this weekend?  Have you read either of these books?  Do you agree with my picks for this week's 50/50 Friday prompt?  As always, thanks for visiting my blog and perhaps even commenting down below!