This year I've been participating in the Novel Knight's Beat The Backlist challenge and since my tbr is just as out of control as always I'm coming back for the 2019 challenge.  This challenge is pretty simple - it's all about reading backlist books (so published in 2018 or older) and it lasts all year long.  There are no genre, format, or length requirements.  You also have the option to sign up for the Hogwarts House mini challenge (which I'm declining to take part in to simplify things for myself), the Goodreads group, a monthly book club, a weekly post series, and the Thursday photo challenges.  Plus, you can update your progress on social media, for example you can follow along on Twitter using the hashtag #BeatTheBacklist and keep up with the Twitter account.  Anyway, let's get on to the books I'm planning on reading for this challenge.  In 2018 I focused on catching up on series that I'd already started - this coming year I'm focusing on reading the oldest books I own all of which were published before 1999.  Here we go, in no particular order: 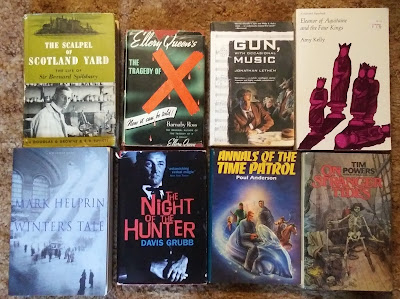 The Scalpel of Scotland Yard: The Life of Sir Bernard Spilsbury by Douglas G. Browne & E.V. Tullett - Published 1952, Spilsbury was a prominent forensic pathologist in Britain when the science was new.  He was even nicknamed the "real life Sherlock Holmes" and along with Scotland Yard he helped put together the "murder bag" which is the crime scene investigator's kit.

Gun, With Occasional Music by Jonathan Lethem - Published 1994, All I really had to hear was SFF noir and I was sold by this one.  It's kind of giving me Who Framed Roger Rabbit vibes as well which doesn't hurt.

Winter's Tale by Mark Helprin - Published 1983, I remember seeing the trailer for the 2014 movie adaption, but I thought I'd try reading the historical fantasy novel it's based on before I watched the movie.  It's definitely time.

The Night of the Hunter by Davis Grubb - Published 1953, I love the movie adaptation of this book and I can't wait to try the source material - plus, it's inspired by true events.

Annals of the Time Patrol (Time Patrol #1 - 2 Omnibus) by Poul Anderson - Published 1983, I'm looking forward to trying this collection of the first two books in this time travel series.

On Stranger Tides by Tim Powers - Published 1987, This is actually what the fourth Pirates of the Caribbean movie was based on.  I've enjoyed all other books by Powers I've read and I can't wait to try it. 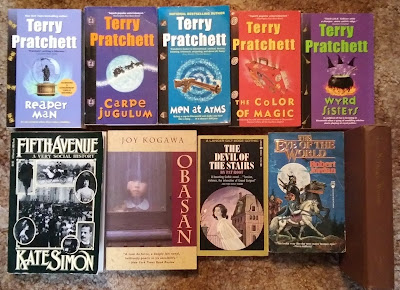 Reaper Man (Discworld #11) by Terry Pratchett - Published 1991, I've read quite a few Discworld books but there are a few on my shelf that I haven't gotten my hands on yet.

The Color of Magic (Discworld #1) by Terry Pratchett - Published 1983, I can't believe I haven't read the book that started it all to be honest.

Wyrd Sisters (Discworld #6) by Terry Pratchett - Published 1988, I've loved seeing Nanny Ogg and Granny Weatherwax before and it'll be great to see more from them.

Fifth Avenue: A Very Social History by Kate Simon - Published 1978, One of my friends gave me this history book and it sounds fascinating.

Obasan (Obasan #1) by Joy Kagawa - Published 1981, This historical fiction novel about the evacuation and relocation of Canadian citizens of Japanese ancestry was also a gift that's based on true experiences.  I don't know much about the subject when it comes to Canada, so I'm sure this will be intriguing and heartbreaking.

The Devil of the Stairs by Pat Root - Published 1956, Seriously, this sounds like all you could ask for in a gothic mystery.

The Eye of the World (Wheel of Time #1) by Robert Jordan - Published 1990, I've heard so many fantastic things about this series and it's more than time I start in on it.

The Strange Woman by Ben Ames Williams - Published 1941, I loved Williams's Leave Her To Heaven (plus the 1945 movie adaptation) and I just need to try more from the author. 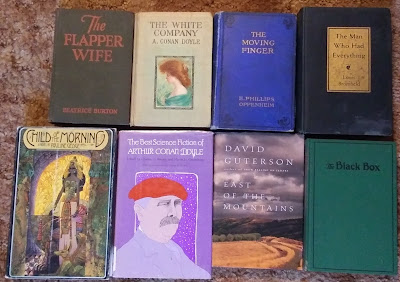 The Flapper Wife by Beatrice Burton - Published 1925, From what I've seen of this author before she does a great job of presenting life in the roaring 20s - used pop culture references and current slang from the times.

The White Company by A. Conan Doyle - Published 1891, I've been meaning to read this classic set during the Middle Ages for ever - now's as good as time as ever.

The Man Who Had Everything by Louis Bromfield - Published 1935, I've been to Bromfield's Malabar Farm in Lucas, Ohio where Humphrey Bogart and Lauren Bacall were married in the 1940s.  It's time I read some of his work.

Child of the Morning by Pauline Gedge - Published 1977, I couldn't resist when I heard historical fiction on Hatsheput, the second female Pharaoh in ancient Egypt.

East of the Mountains by David Guterson - Published 1999, This one was also a gift and while it doesn't quite sound like my kind of story it still sounds quite intriguing.

The Black Box by Thelma Lientz - Published 1929, This is part of The Adventure and Mystery Series for Girls and it sounds like it could a great mystery. 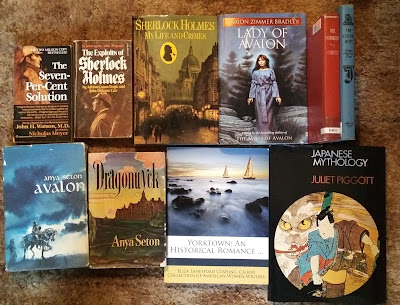 The Seven-Per-Cent Solution by Nicholas Meyer - Published 1974, Holmes is one of my favorite characters and I've heard Meyer's take is pretty fantastic so I'm looking forward to trying it for myself.

The Exploits of Sherlock Holmes by Adrian Conan Doyle and John Dickson Carr - Published 1954, I've never read anything by Doyle's son, but I have high expectations to say the least.

Sherlock Holmes: My Life and Crimes by Michael Hardwick - Published 1984, I have to say I can't wait to try this fictional autobiography.

Lady of Avalon (Avalon #3) by Marion Zimmer Bradley - Published 1982, I really loved The Mists of Avalon and I'm can't wait to read the prequel.

Mrs. Parkington by Louis Bromfield - Published 1942, Another classic from the local Ohio author I need to try.

Top Assignment by George Harmon Coxe - Published 1955, I found this mystery novel at a barn sale a while back it's time I check it off my tbr.

Dragonwyck by Anya Seton - Published 1944, The 1946 movie adaptation of this novel is great and I'm hoping the book is even better.

Yorktown: An Historical Romance by Eliza Lanesford Cushing - Published 1828, I found this reprint of the public domain novel at a library book sale a couple months ago - it will certainly be interesting to read the oldest book on my list.

Japanese Mythology by Juliet Piggott - Published 1969, I've heard this is kind of the standard for books about Japanese mythology, so I'm looking forward to giving this a shot.

Congrats if you've made it this far!  Are you planning on tackling the 2019 Beat The Backlist Challenge?  Have you read any of the books on my tbr?  As always, thanks for visiting my blog and perhaps even commenting down below!