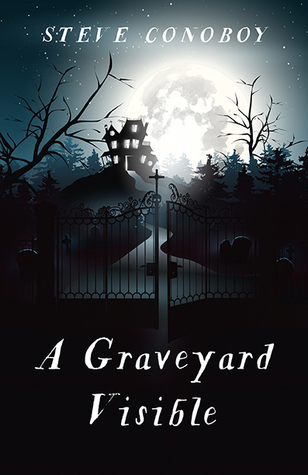 Caleb can see an ancient graveyard from his bedroom window and he's certain that it's a just a little bigger every time he looks at it. There are funerals there every night, but no one in his town seems to be dying. Misha, the odd girl who lives at the cemetery with her grandfather, is interested in Caleb and no matter what Caleb does he can't get rid of her. He's sure those creepy graveside mourners that are at every funeral are forcing her into strange rituals against her will. Caleb, who is still reeling from the death of his mother, has found himself pulled into the world of the dead and it may be too late to pull himself back out.

A Graveyard Visible by Steve Conoboy is a very promising story to start off. I liked the author's gothic and descriptive writing style. The first twenty to thirty percent were actually pretty fantastic that really had me hooked. However, the further I read through the story the more my interest waned. I was most interested in what was going on with the graveyard, but we never really get any real answers about it. Plus, the more I read the more difficult it became to follow the course of events. In the beginning, Conoboy does a brilliant job of building and creating that sense of suspense and tension. Unfortunately, by the end of this story I was close to DNF'ing this one. Most of the questions I was interested in are never answered and sometimes the shifts in perspective and formatting could be a bit confusing.

Overall, I really wanted to like A Graveyard Visible by Steve Conoboy much more than I did. It has a lot of potential and it started off well. By the end, though, it just wasn't for me. I felt like I was left hanging on the elements that intrigued me the most.