The Coffin Maker (The Coffin #1) by Breeann Allison (ARC) - Review 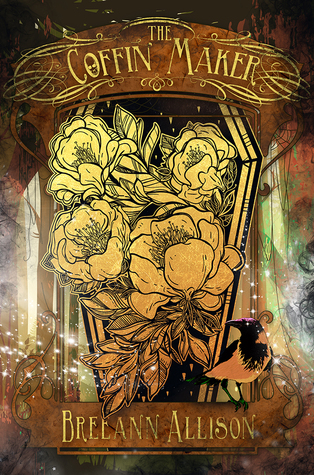 Twenty-three year-old Jesse is the respected coffin maker in the Halloween tourist town of Gregor’s Hollow. He took over the family business after his father disappeared years ago. His routine is disturbed when Death himself pays a visit to Jesse's shop demanding eight coffins in time for Halloween. The coffins are for his next victims, all of which are from the town. Jesse can't turn Death down, especially when in exchange Death will tell him what happened to his father. Although taking Death's deal, Jesse has a different plan. Although he's started on the coffins, he's going to save Death's next victims.

The Coffin Maker by Breeann Allison sounded like it could be right up my alley. While it was good, it just didn't quite work for me. It's described as a mystery/ thriller fantasy, but it's definitely much more of a cozy mystery with a dash of paranormal. Cozies aren't particularly my style. I liked getting to know the town, but I wasn't all that interested in any of the characters. Plus, some of the character names are really odd. I mean, Etsy Glass and Jebediah Jinkles - are you kidding me? Was I supposed to laugh so much every single time I came across them? I think my favorite aspect of the story is Death's introduction, but maybe that's because he reminded me of Death in Supernatural when it comes to food.

Overall, this mystery wasn't bad, it just wasn't for me. It wasn't quite what I was expecting in the long run. It has some intriguing elements, particularly in the world-building when it comes to the town of Gregor's Hollow and the dash of the paranormal. If you like cozy mysteries and perhaps Midnight Texas tv adaptation, you may enjoy this story. My real question: Why isn't this being released at Halloween, rather than on the first of May?