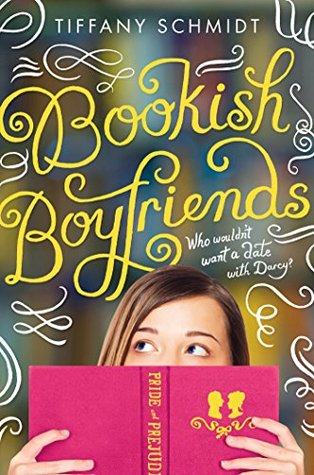 As far as sixteen year-old Merrilee is concerned, boys in books are much better than boys in real life. What she wouldn't give to have a real boy sweep her off of her feet into a whirlwind romance like her favorite book boyfriends. She's about to get the chance of a lifetime when she, her best friend, and her sister start at a prestigious new high school, but things don't always turn out the same way for her as they do for her favorite heroines.

Bookish Boyfriends by Tiffany Schmidt sounded like it could be a fun YA contemporary. I have a hard time saying no to a character who loves books. Unfortunately, the first half or so of this story was incredibly grating, and a lot of that is due to Merrilee herself. As a book lover, I really hope I'm not half as annoying as Merrilee to my peers who don't love reading quite so much as I do. I probably gave my eyes quite a work out with all of the rolling they were doing in the sockets, especially as her English class starts studying Romeo & Juliet and Merrilee begins to think she's found her own personal Romeo - not what I'd call a good thing, by the way. The second half of this story is where things really begin to take off. I'd give the second half maybe four stars actually. I loved Merrilee's wake up call. She begins to grow as a character which was great, and a relief to see actually. By the way, I have to say I think I identified the most with Merrilee's English teacher - and that makes me feel pretty dang old. Finally, I liked the element of the events of the books Merrilee's reading seemingly manifesting into her life, but this totally wasn't that kind at all even though I wish it could have been.

Overall, Bookish Boyfriends by Tiffany Schmidt was a serviceable YA Contemporary that begins to pick up way too late to really overcome an annoying opening. Once it does pick up the pace though I found myself actually beginning to enjoy it. I was pleased to see that our main character actually begins to improve and change for the better as the story progressed. If you like bookish characters that prefer their reading material to the real world, you may also want to meet the heroine of Bookish Boyfriend.