Made of Darkness (Lunis Kendall #1) by Erica M. Kim - Review 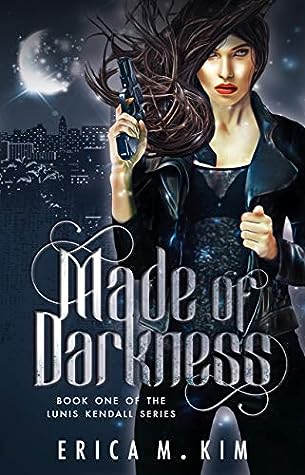 I received an ecopy of this book from Reedsy in exchange for an honest review.

Made of Darkness (Lunis Kendall #1) by Erica M. Kim is a fantastic way to kick off a brand new paranormal romance urban fantasy series. Urban fantasy is one of my favorite sub-genres of fantasy and I always have my eyes peeled for unique new additions to the genre that really stand out from the crowd. Luckily for me, I had the opportunity to read this new release courtesy of Reedsy and it hit almost exactly the right notes for me.

Made of Darkness follows Lunis, a woman who runs her own dog grooming business who during the full moon turns into a monster. She doesn't physically change into a werewolf or anything like that, but it's more like her state of mind changes and she becomes a fiercely violent, bloodthirsty, stone cold killer. She uses her dark side to moonlight as an assassin. Let's just say that she has become very good at what she does and she gets paid well for her skills. It's a living and it pays her bills. She keeps everyone at arms length due to that monster she becomes every month, but then she meets Lio at her shop. As far as she's concerned, he's practically perfect in every way - he's handsome, wealthy, and he seems to be genuinely interested in her - but she knows any kind of relationship is out of the question. Against all reason, though, Lunis finds herself drawn toward Lio unlike anyone else in her life.

I'd love to continue and go into more detail on everything that happened, but I don't want to spoil anything good for future readers. However, I will say that I adored getting to know Lunis and Lio. Both characters are well-developed and they each feel like they could walk right off the page. Lunis is quite a lead and she's a bit different than I expected. Kim's writing clearly reflects the curse Lunis has been dealing with her whole life and how it influences her decisions. I also loved the unique world-building. The magical and fantasy elements start fairly light and as the story goes on they build up and become one of the most intriguing aspects. There's so much more I want to know about Lunis's world. Like I was saying earlier, I'd like to say more, but that would take us too far into spoiler territory.

Finally, I just want to mention a couple of things that didn't quite work for me in this novel. I knew going into this book that there's a romance element and some explicit content. Romance isn't usually my thing, but sometimes I surprise myself. Personally, it was a little much for me here, so I skimmed some of the heavier spots. As I said above, the strength of the characters helped me with this though as they had already grown on me. Otherwise, my only other minor issue with the story is that from time to time dialog and some of Lunis's inner monologue can be awkward. There are a couple of spots that took me out of the story as it could have done with a little more editing to improve flow.

Overall, Made of Darkness has the potential to become a new favorite series for me since it starts off incredibly strong. I'm certainly looking forward to reading more of Lunis's future adventures. If you're a fan of urban fantasy, paranormal romance, and the Charley Davidson series by Darynda Jones, I have a feeling you'll want to dive right into this series opener. I can't wait to see more from this author in the future.


My review can also be found on Goodreads and Reedsy.