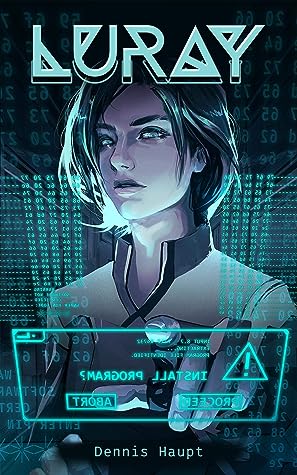 ❋ ❋ ❋ ❋
I received an ecopy from Reedsy Discovery in exchange for an honest review.

One of humanity's colonies makes contact with an alien civilization that calls itself the Aurigan Empire. The empire politely demands the United Earth Military's unconditional and immediate surrender and sends wave after wave of warships. Strangely, the Aurigan ships are technologically inferior, lack any sort of effective weaponry and are easily shot down - or so the UEM claims. When the colony's investors start getting nervous, acclaimed risk assessment agent Luray Ulyssa Cayenne is sent to determine what is going on and whether the Aurigans truly pose a threat. What she finds is well beyond her pay grade, and what she does to uncover the truth could cost not only her freedom, but her very humanity. Enjoy a mysterious science-fiction story challenging the reader and asking difficult questions that will keep you awake at night.

Luray (Behind the Last Gate # 1) by Dennis Haupt caught my attention right away when I spotted it on Reedsy Discovery. I mean, just look at that cover art after all. I wasn't at all familiar with the author Dennis Haupt going into this novel, but I decided to give this new science fiction novel a chance. Just based on that description and short sneak peek, it sounded like it would have a lot of potential. Luckily, now that I've finished and have had some time to digest it I can officially say that it's an addicting and unique story with a great cast of characters and just the right dash of dry humor and banter to round it out. It mostly lives up to all that potential I found in just the summary and sample.

This novel goes really fast. I honestly felt like I couldn't put it down since I just had to know what was coming up next for Luray, the titular character. I can't say I've every read a novel featuring a main character that's a risk assessment agent, let alone one in a science fiction setting. She's performing a risk assessment of a colony that's made first contact with an alien civilization. I greatly appreciate that she is very, very good at what she does and what she finds out could change everything. I've mentioned it before, but I also appreciate a complex story that requires you to use your head and this definitely does that on top of everything else. My only real complaint for this novel are that at points the writing feels a bit stilted. Not so much during dialog, but there are other moments where the novel doesn't flow as well as it ought to.