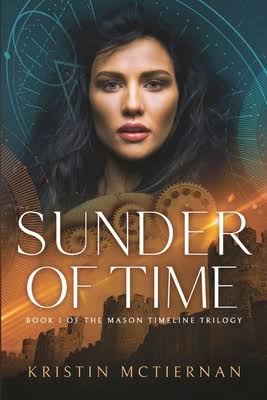 ❋ ❋ ❋ ❋
I received an ecopy from Reedsy Discovery in exchange for an honest review.

Isabella Jaramillo is accustomed to getting what she wants. Living a comfortable life as the daughter of the world’s sole time travel magnate, Isabella has never suffered the irritation of being told no. Only now she has gone too far and her soon-to-be ex-husband tells her no in the most vengeful way possible—by sabotaging her trip to the past, sending her to a distant land where the locals do not speak her language and are far from impressed by her haughty demeanor. Now a slave, Isabella makes some surprising allies and discovers the truth behind her father’s rise to power and the terrible price the entire world paid for it. Somehow, she must break free and find a way home, not only to save herself, but to restore history to its rightful direction.

Sunder of Time (The Mason Timeline Trilogy #1) by Kristin McTiernan is a new favorite science fiction series opener. I'm so glad I decided to give this novel a chance via Reedsy Discovery. I didn't really have expectations for it one way or the other, but it ended up being quite a pleasant surprise in the end. I know I've said it before, but I'm always on the lookout for a cool new time travel novel to lose myself in. Time travel is one of my favorite subgenres of sci-fi and for the most part this one checked all the right boxes for me.

I can easily say that much of that is due to Isabella, our leading lady. She's basically a socialite whose father owns a time travel company. She usually gets whatever she wants on her own terms, but then she has quite a reality check when a planned time travel trip to the 1920s gets sabotaged and sends her into the distant past instead. To get home and restore the timeline, she has to dig very, very deep and do whatever it takes. She goes on quite a journey over the course of the novel and her arc is a good one. I really surprised myself by just how invested I became in her character given how she behaves when we first meet her to where she ends up. I also particularly enjoyed the author's world-building. It's very complex, dynamic, and detailed. It really feels as if the author has done her homework. I don't often have the opportunity to read time travel novels that goes back in time as far as to the Middle Ages, but the author does a god job bringing what and who Isabella encounters to life. The only really complaint to this novel is that the final 25% of the novel doesn't quite hold up as well to the rest of the novel. It starts off really strong and while the payoff is good, it isn't as great as it could be. The potential for it to have earned a full five star rating is very close, but it just didn't quite make the cut.

Overall, though, this novel is well-worth your time if you're a fan science fiction, time travel, and Doomsday Book (Oxford Time Travel #1) by Connie Willis. I'm looking forward to continuing this series in the future. There's so much potential for this to become a new favorite series. It's already well on the way to it that's for sure!
Sunder of Time (The Mason Timeline Trilogy #1) by Kristin McTiernan will be launched by Reedsy Discovery on January 5, 2021 and my review is also on Goodreads.