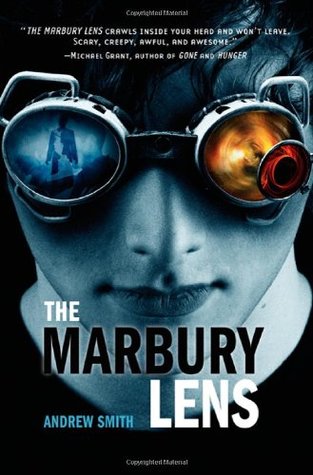 After Jack's kidnapping and narrow escape, the only person he tells about it is his best friend, Conner. The the two friends head off to London for summer vacation to tour a school, when a mysterious man hands him a strange pair of glasses through which he can see another world called Marbury. Marbury is a desolate and grim world at war, and the version of Jack that seems to live there is in charge of the survival of two younger boys. Conner is there in Marbury, but he's on the opposing side and is trying to kill Jack. In the real world, Jack doesn't know what to or if he's hallucinating Marbury. As much as Conner tells him that everything will be okay, Jack knows it won't be.

The Marbury Lens by Andrew Smith is my fifth book by Smith, who has quickly become a favorite. This book is my third (of five) read for YALSA's Backlist Bingo Reading Challenge and it fulfills the option for Amazing Audiobook from any year. I was absolutely enthralled right from the get-go on this audiobook. The audiobook production is fairly spare, but the narrator totally captures the dark and grim world of Marbury that Jack finds himself spending more and more time in.

As for the cast of characters, Jack and Conner, regardless of what they find themselves going through, manage to sound and act like very real teen boys. I'm pretty sure I knew very similar people when I was actually in school. I also particularly enjoyed the little bit of romance Jack has with Nickie. Their budding romance is quite sweet all things considered. In regards to Marbury itself, the world is fascinating and, of course, quite a distressing post-apocalyptic place that is something like an alternate dimension. I couldn't help but think of Mad Max or The Road while Jack was in Marbury. In the end, I wish that more of my questions regarding Marbury had been answered. Either way, I think that means that I'll have to come back for the sequel.

Overall, The Marbury Lens by Andrew Smith is definitely worth reading despite just how much different it is from the rest of his works - it's important to note that this doesn't have the sense of humor of Grasshopper Jungle or Winger. For lack of a better work, it's down right freaky, but utterly riveting. It will have you turning those pages, or keeping those earbuds in your earholes for as long as you can stand, and wanting more all the way to the very end. I'm looking forward to the sequel, Passenger. 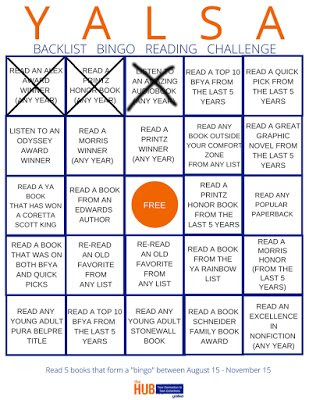 I listened to the audiobook from October 27 - November 1, 2016 and my review is also on Goodreads.