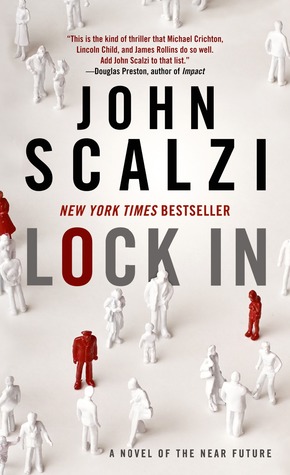 In the near future, a highly contagious virus, sweeps around the world. Most who catch it have flu-like symptoms, but an unlucky single percent of the population experience "lock in". Those with it are fully aware and awake, but unable to move or respond to stimulus in a way. Twenty-five years later, the world has adapted to meet the challenges of Haden's syndrome and two FBI agents, a rookie and a veteran, are on the case of what appears to be a Haden-related murder investigation. Their suspect is an "integrator", someone who can let the locked in use their bodies for a time, so that makes everything all the more complicated. As the agents begin to unravel the mystery, they begin to see that the real crime is much bigger than anyone could have ever expected.

Lock In is my first John Scalzi book. I finally decided to give his work a try after hearing so many great things. I'm glad I decided to take the plunge because his world-building, dialog, and sense of humor are right up my alley. I enjoyed discovering the differences between the real world and the his frightfully close version of the near future. This vision is quite unique and creative - I can't say that I've ever encountered a story quite like it before which is great in and of itself. As fascinating as the world is, my favorite aspect, however, is definitely getting to know his cast of characters - Chris Shane, a well-known Haden and, especially, his partner, Vann, a jaded FBI agent. I loved watching their working relationship develop and seeing them begin to trust one another. In the end, the only reason I ended up giving this only four stars rather than five is because it was a bit confusing to keep track of a few things and I wish that we could have seen more of the Agora, the virtual world made specifically for Hadens.

Overall, I highly recommend Lock In by John Scalzi to those who need a new sci-fi mystery to sink your teeth into. The novel has so much going for it from great characters, snappy dialogue, excellent world-building, and a pitch perfect sense of humor. This will certainly not be my only Scalzi novel! 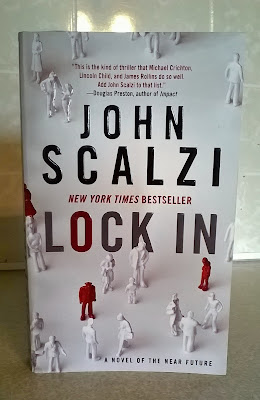 Now, the reason you're all here: a giveaway!  In honor of Sci-Fi Month, hosted by Rinn Reads and Over the Effing Rainbow, I'm giving away my paperback copy of Lock In by John Scalzi.  This giveaway is open internationally - it begins now and runs until 12:00A.M. on December 1st.  I will alert the winner via email and they will have 48 hours to respond or I will select another winner.  May the odds be ever in your favor!