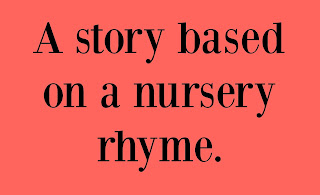 Before I get on with it, I was originally planning on doing something entirely different with this prompt and come up with scene based on a classic nursery rhyme (which I will mention below).  Anyway, I've decided to talk about a book of nursery rhymes that I couldn't get enough of when I was a little kid and share some of my favorites from the book. 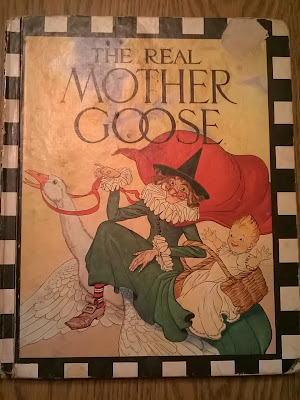 When I was from around age three to five or six The Real Mother Goose by Blanche Fisher Wright was my favorite book, and I still have a soft spot for it.  My dad used to read the nursery rhymes it features to me all of the time.  This book was originally released in 1916 and my edition is from 1984.  You can probably see just how well loved it's been.  Anyway, the nursery rhymes on the pages below were some of those that really made an impression on me, especially the ones with the cute illustrations.  Some of these are still fairly well known, but others not so much.  You know, I bet if you asked my dad about any of these right now, he could probably recite them from memory off the top of his head. 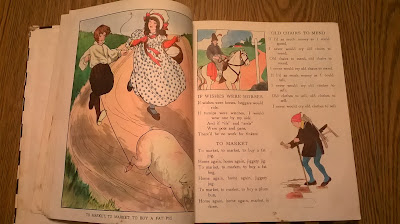 "To Market" - I clearly remember this one being quite a hit with little me.  I'm pretty sure I loved it so much because I got to say "jiggety jig" and "jiggety jog"!  Also, growing up on a farm, I couldn't resist the illustration. 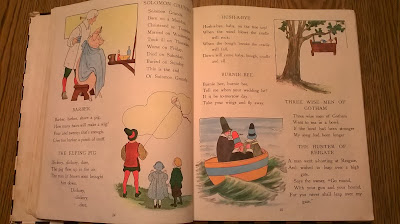 "Barber" - This one was especially ridiculous to me when I was little, from the text of the rhyme to the illustration.  And, I expect I didn't know what snuff was then.

"Solomon Grundy" - I actually used to dream about this one.  Sometimes, it even turned into a nightmare if I got to the end of the rhyme!

"Three Wise Men of Gotham" - Yeah, I dreamed about this one too... I expect things got pretty weird there! 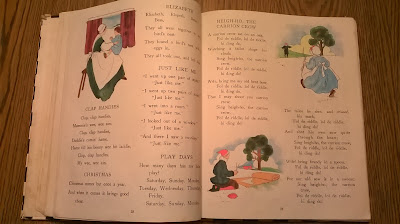 "Heigh-Ho, The Carrion Crow" - This was one of the longer ones that I was obsessed with, but looking back on it now I probably didn't pay all that much attention to the events of the rhyme... This is the one that I was originally thinking of doing my scene on - after all, we're just left hanging on the fate of that poor sow! 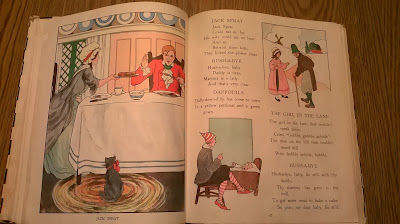 "Jack Sprat" - This is firmly embedded in my memory, especially the full page illustration on the left.  Just look how cute that kitty is with the red bow around it's neck! 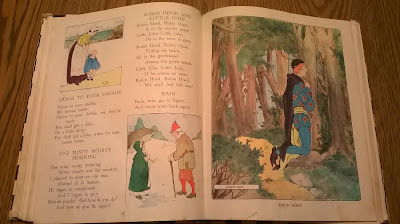 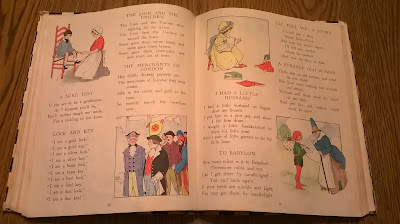 "Lock and Key" - Little me thought this one was absolutely hilarious - "don lock" and "don key" got me every single time! 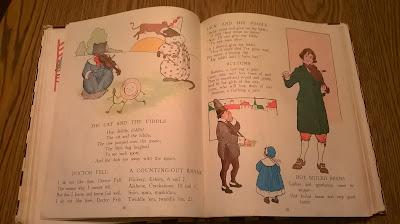 "The Cat and the Fiddle" - A classic!  How could I not like this?  Plus, there's so much going on here that makes me want to know more.  So many elements could make intriguing little stories.

"Hot Boiled Beans" - I was a weird kid - I liked this just as much if not more than "The Cat and the Fiddle"... "Hot boiled beans and very good butter" - sure sounds tasty alright! 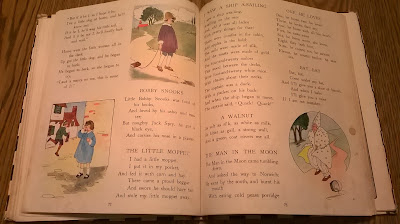 "The Little Moppet" - I really felt for that girl in the illustration...

"The Man in the Moon" - I'm still not a hundred percent sure of what "pease porridge" is to this day.  I mean, is it something like a very thick pea soup, or something altogether different?  Also, dad didn't rhyme "Norwich" with "porridge", so that probably threw me off, too.

"Bat, Bat" - Honestly, I was most likely hooked on this because it features bacon and cake!


If you made it this far, thanks very much for reading (and perhaps even commenting)!  What are some of your favorite nursery rhymes?