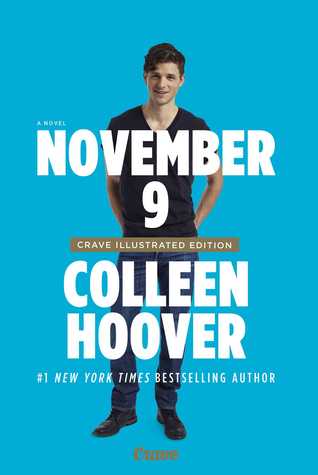 Fallon met Ben, an aspiring author, the day before her cross-country move during a bad dinner date with her father. Fallon used to be a popular teen actress until a house fire left half of her body covered in scars - and her famous father keeps reminding her that her career move to audiobook narrator in NYC doesn't pay and won't bring the fame of her old hit show. Ben and Fallon's attraction leads them to spend the rest of the day together before her move. Her life becomes an inspiration for Ben's writing career. At the end of their day, the two decide to meet to up every November 9th for the next five years with zero contact between. They'll live their own lives, but then they'll drop everything regardless of where they are or what they're going through to meet up at the place they first met. Until one day, Fallon starts to think Ben might have been lying about everything to create the perfect plot twist.

November 9 is my first Colleen Hoover book. New Adult Romance isn't my go-to genre, but when it arrived at my library I decided to take a chance on it. I'll have to admit that otherwise one of my main reasons for trying it is because it was the Crave Illustrated edition of the novel. I remember hearing about the Crave Romance app when it was released as a way to make your reading experience more immersive. Since that particular app isn't available for Windows Phone yet, I haven't had the chance to test it out. These Crave Illustrated editions, try to replicate the experience of the app in a print format - with videos or playlists linked by QR codes that you can scan. There are photos, art, texts, interviews, playlists, and author behind-the-scenes to enjoy with the story. Again, it's not one of my go-to genres, but I like the idea behind these special editions if only for the format and the pretty pictures.

As for the bookitself, it hooked me right off the bat and is a very quick read that while being a pretty light read does take on a few heavier issues. Colleen Hoover certainly succeeds at creating compelling, if flawed characters. I didn't want to look away from Fallon or Ben - they're pretty fascinating, especially as we get to watch them grow up over the course of six years from their first meeting - if only in those short snippets of time. However, I still had plenty of issues with it from the start. Was it just me or did anyone else have a difficult time trusting Ben right from his first appearance - or, right from the moment he said he didn't like ice cream? I was just waiting for more red flags to be flying up. One of my biggest issues, though, is by far the instalove because although years pass, they're only actually together for a handful of days. And, for only knowing each other for a handful of days, they sure do have a lot of feelings for one another. What really gets me on top of that is that Fallon tells Ben that as a fan of romance novels, she can't stand instalove because in writing it makes her roll her eyes and it's too cheesy and unrealistic. Anyway, while I was interested in the characters, I wasn't exactly hooked on the plot until much, much later when I Fallon begins to question Ben's motives.

Overall, the Crave Illustrated edition of November 9 was certainly an intriguing read populated with a fascinating cast, plus a pretty great format and layout. The interesting format definitely eared it a full star on it's own. I probably won't be reading another one of these illustrated editions, but it was good while it lasted. If you prefer your Contemporary to be heavy on the romance and/ or instalove, you may want to check out this story.