Welcome to my leg of the Faithful (Birth of Saints #2) by Michelle Hauck Blog Tour, hosted by Rockstar Book Tours!  Below you will find the details and summary of the book, my review of Faithful, an about the author, Michelle Hauck, a giveaway, and the blog tour schedule.  Thanks for visiting my stop on the Faithful Blog Tour! 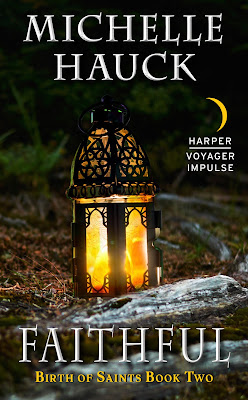 Following Grudging--and with a mix of Terry Goodkind and Bernard Cornwall--religion, witchcraft, and chivalry war in Faithful, the exciting next chapter in Michelle Hauck's Birth of Saints series!

A world of Fear and death…and those trying to save it.

Colina Hermosa has burned to the ground. The Northern invaders continue their assault on the ciudades-estados. Terror has taken hold, and those that should be allies betray each other in hopes of their own survival. As the realities of this devastating and unprovoked war settles in, what can they do to fight back?

On a mission of hope, an unlikely group sets out to find a teacher for Claire, and a new weapon to use against the Northerners and their swelling army.

What they find instead is an old woman. But she’s not a random crone—she’s Claire’s grandmother. She’s also a Woman of the Song, and her music is both strong and horrible. And while Claire has already seen the power of her own Song, she is scared of her inability to control it, having seen how her magic has brought evil to the world, killing without reason or remorse. To preserve a life of honor and light, Ramiro and Claire will need to convince the old woman to teach them a way so that the power of the Song can be used for good. Otherwise, they’ll just be destroyers themselves, no better than the Northerners and their false god, Dal. With the annihilation their enemy has planned, though, they may not have a choice.

A tale of fear and tragedy, hope and redemption, Faithful is the harrowing second entry in the Birth of Saints trilogy.

I received a free ecopy of this ARC  from  Harper via Edelweiss+ for this blog tour.

When I saw the opportunity to sign up for this tour, I was immediately intrigued.  I hadn't read the first novel in the Birth of Saints series, but the summary was so intriguing that I wanted to try it regardless.  Of course before I began reading this sequel, I went back and read several reviews of book one in an attempt to quickly catch myself up on the goings on, the characters, and the setting.  Luckily, I was really able to enjoy this novel, Faithful, even though at times I felt a little out the loop.
There were several things about the novel that I particularly enjoyed about Hauck's novel - the setting and world-building, the magic, and the characters.  The world-building is well-developed and the setting is very complex.  The epic fantasy has a Spanish flavor that I don't often see in YA, so that was actually pretty refreshing.  As refreshing was the presentation of the magic system.  I'll admit that I didn't fully understand exactly how it functioned (and I'll probably need to actually read book one to get a better handle on it), but the fact that it operates through music and song still fascinated me.  Ramiro and Claire were excellent characters to get to know and learn more about their relationship, plus their duty and home.  Both undergo a fair amount of growth and development over the course of this novel.

Overall, if you're interested in YA epic fantasy you will certainly want to try this Faithful by Michelle Hauck, but perhaps first begin the trilogy with book one, Grudging.  I know I'll definitely be going back to see how it all begins and I am looking forward to the seeing how the series will conclude.  I also hope to someday have the chance to read one of Hauck's other novels, particularly Kindar. 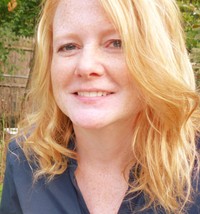 Michelle Hauck lives in the bustling metropolis of northern Indiana with her hubby and two teenagers. Two papillons help balance out the teenage drama. Besides working with special needs children by day, she writes all sorts of fantasy, giving her imagination free range. A book worm, she passes up the darker vices in favor of chocolate and looks for any excuse to reward herself. Bio finished? Time for a sweet snack.

She is a co-host of the yearly contests Query Kombat and Nightmare on Query Street, and Sun versus Snow.

Her epic fantasy, Kindar's Cure, is published by Divertir Publishing. Her short story, Frost and Fog, is published by The Elephant's Bookshelf Press in their anthology, Summer's Double Edge. She's repped by Sarah Negovetich of Corvisiero Literary.

Giveaway Details: 2 winners will receive signed paperbacks of book 1, Grudging, US Only.