And Then There Were Crows by Alcy Leyva (ARC) - Review 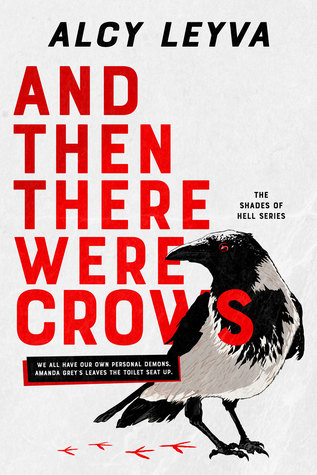 Amanda Grey has always been stressed out by life in NYC from the train to public restrooms. For her, avoidance has always been a great policy. Luckily, the apartment she shares with her parents is a great place of refuge against the stresses of city life. She goes from focusing on dealing with her own demons to dealing with actual demons since she accidentally unleashed the Six Shades of Hell on her city, and there's the fact that she's rented out a room to a very real demon, who goes by D. If she wants to make it through this she's going to have to accept the help of Barnem, the guy who lives upstairs, who just happens to be a seraphim. Though to tell the truth, she can't be sure if Barnem is motivated by roommate loyalty or the wish to enslave all of humanity.

And Then There Were Crows by Alcy Leyva is a decent debut urban fantasy novel. This novel provides a good introduction to Amanda's world. Leyva's tone and writing style is quite addicting right from the beginning. The description alone pulled me in and as I read the novel I particularly liked his brand of urban fantasy and the sarcastic sense of humor. His storytelling also keeps up a decently fast pace, so the action never lags. As for the characters, my favorite was the anti-social Barnem. I will say that Amanda isn't exactly a likable character, but she is fascinating and comes very strongly across the page. She has a sharp mind and an even sharper tongue, and it's not exactly difficult to see yourself in her as she deals with everything that's thrown her way from the mundane to the magical. This easily could have been a four star read for me, but unfortunately I felt just a little out of the loop from very early on. I was starting to wonder if this was actually a sequel. However, once I started to get into the story and the author's style of writing I began to get into the swing of things, but I still wish some of the fantasy elements were explained better from the get go. Overall, if you're looking for an intriguing new voice in urban fantasy you may want to try Alcy Leyva's And Then There Were Crows. I doubt it's for everyone, especially our leading character, but otherwise it has many great elements to make it compulsively readable.