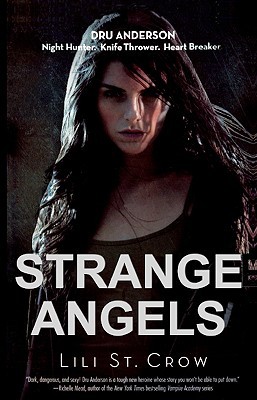 Dru and her dad hunt the monsters of the Real World. Even if most people don't want to believe in them doesn't make them any less dangerous. Dru also has what her grandmother called the touch, which definitely comes in handy when fighting the things that go bump in the night. Then, one night when her dad's on a hunting trip without her, he returns as a zombie and Dru is forced to deal with him in the only way she can. Dru knows that whoever turned her dad will be coming for her, so she better figure out her next move fast.

Strange Angels by Lili St. Crow was recommended to me because I enjoy watching Supernatural and Buffy the Vampire Slayer. It mostly holds up to these and it's lore is also kind of unique, especially considering the last book I read for the same reasons let me down (see Unbreakable by Kami Garcia). For the most part, I enjoyed the fun thrill-ride with interesting new characters, but it took me a while to get hooked on the story and at points Dru could get annoying. Her saying "kid" all the time also got a bit old.