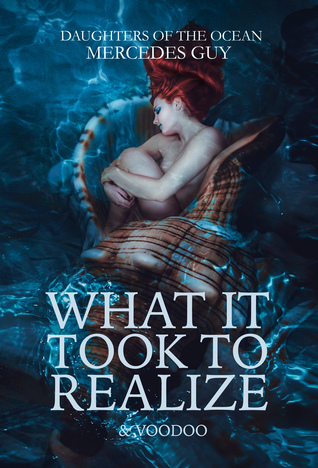 What It Took To Realize - Morgan is a teenage half-mermaid, being raised by a water-nymph, and a major outcast at school where she is bullied by a pixie who is also the head cheerleader. She tends to live a relatively normal life when she's not too busy keeping her paranormal life separate from the real world. One day Leroy, the hottest boy in school, both a vampire and football quarterback, asks her out on a date. Things get a lot more complicated when Leroy rapes her and begins threatening her. For one thing, Morgan realizes she pregnant with some kind of fast-growing, supernatural baby and for another she realizes she has feelings for Emmaline, a new girl at school who is also a Lythary, which is an elf that can turn into a wolf (not exactly a werewolf since she is still mentally herself after she transforms).

Voodoo - Exactly the same story, but told from Emmaline's perspective, plus some tacked on flashforwards.

When I reread this summary I just wrote, it honestly sounds like it could be an episode of Maury, Jerry Springer, or Dr. Phil (with paranormal elements, obviously). I don't really know what to make of what I just read.

The overall plot is alright. I usually enjoy fantasy and paranormal stories. In this case, however, I would much prefer the story without those elements. Those aspects seemed quite unnecessary to me, in the same way as the Voodoo section. If only it weren't as rushed, didn't escalate as quickly and dramatically, if the characters were more fully fleshed out, and if the multiple typos were corrected, this novel sans the paranormal could be a promising YA contemporary.