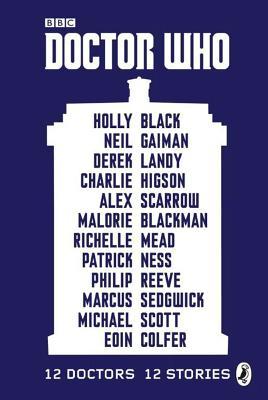 Twelve fantastic authors come together to tell twelve original Doctor Who short stories - each one featuring an incarnation of the Doctor.

I was so excited when I saw this on the new shelf at my local library - I ran right over and snatched it up before anyone else got the same idea! Although there are so many great authors participating in this collection, I only wanted to read the stories to go along with the new era of the show (9th-12th). I am interested in the classic era, but I would like to have a greater sense of the character's voice and tone - like I do for Eccleston's, Tennant's, and Smith's (I haven't seen any of Capaldi's episodes yet, but I will soon). I'd like to have a greater familiarity with the previous actors in the part before I look into their stories.

I read "The Ninth Doctor: The Beast of Babylon" by Charlie Higson, "The Tenth Doctor: The Mystery of the Haunted Cottage" by Derek Landy, "The Eleventh Doctor: Nothing O'Clock" by Neil Gaiman, and "The Twelfth Doctor: Lights Out" by Holly Black (even though I'm not yet familiar with Capaldi's performance I wanted to read this since I like Holly Black and I will hopefully be watching the series eight soon). Each story was very good on it's own, but my two favorites were "Nothing O'Clock" (with Amy) and "The Mystery of the Haunted Cottage" (with Martha). I would love to see tv adaptations of both of these! "Nothing O'Clock" is super creepy and it's written by one of my favorite authors (and sometime writer for Doctor Who) - the Kin would be great villains to see on screen. "The Mystery of the Haunted Cottage" has a brilliant concept - the Doctor and Martha find themselves in recreated worlds of different books.

In regards to "The Beast of Babylon", the 9th Doctor's story, it's also quite good and is set between the time when the Doctor first asks Rose to travel the universe with him and that the TARDIS can also travel in time. This is a side adventure with a non-human companion where he realizes he should ask Rose one more time. The 12th Doctor's story, "Lights Out", features the Doctor on a mission to get Clara a really good coffee at the International Coffee Roasting Station, but he gets mixed up in a murder mystery alongside one of the roasted coffee bean shippers. Both of these were good, but I did prefer the 11th and 10th (Tennant is my personal favorite) Doctor's stories.

Of the four stories I read from this collection, each author really gets the Doctor's tone and his known companions (Martha and Amy, in this case) down pat. I really enjoyed reading them and in the future I'm looking forward to checking out the previous Doctors' stories (when I'm more familiar with them, anyway). I also can't wait to watch the eighth series with Peter Capaldi!