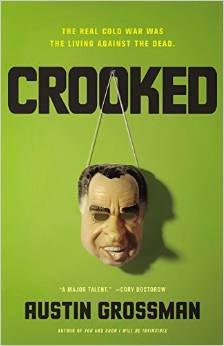 Richard Nixon's political career spanned from the 1950's to the 1970's. He went from a mastermind to a national joke. What if the man we call the nation's worst president is actually one of our greatest? In this alternate history, a young Nixon stumbled upon a supernatural secret and its ties to world politics ranging from the truth behind the Cold War to the Watergate cover-up.

Overall, this is a well-written story featuring prominent historical characters and events with a unique twist, but it left me feeling that too many questions had been left unanswered. Now, if only there was a companion novel featuring an earlier president to help fill in some of the supernatural gaps - Theodore Roosevelt, Thomas Jefferson, or George Washington perhaps?