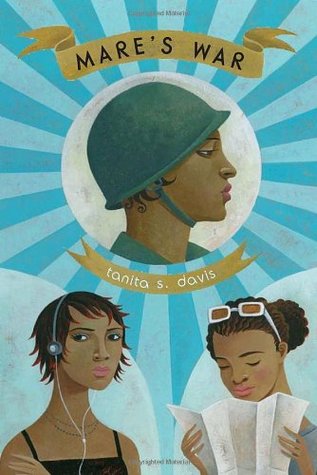 Octavia and Tali are being forced to take a cross-country road trip with their grandmother called Mare to a family reunion. Mare doesn't look or act anything like what you would expect of a grandmother, not by a long shot. For one thing, she drives a red sports car and wears stilettos. The two teens learn that there's a lot more than meets the eye when it comes to their grandmother. They realize that she was once a willful teen who fled from her less-than-perfect home to join the African American battalion of the Women’s Army Corps during World War II.

I heard about this book a couple of weeks ago and decided I needed to read it. I've always been interested in women in WWII, but I hadn't had the chance to read much about African-American women doing their part. Mare's War is definitely a good place to start if you're looking for a YA fiction novel on the topic. The novel is told in alternating "then" and "now" chapters - then being Mare's story of growing up and joining the war effort, and now being the cross-country car trip with Mare, Octavia, and Tali.

As for the now segments, the characterizations of Mare, Tali, and Octavia are fantastic. I particularly enjoyed seeing the differences in mindset between Mare and Tali and seeing all three of them get closer through storytelling. As much as I liked the portion of the story set in the present day, I found myself most interested in Mare's story of WWII. Like I mentioned before, though, I've always been interested in the topic of women in WWII. After finishing this novel, I wouldn't say no to it even if it just featured Mare's past.

Mare's War by Tanita S. Davis is a must-read if you're interested in women's efforts during World War II, especially in learning more about women-of-color.