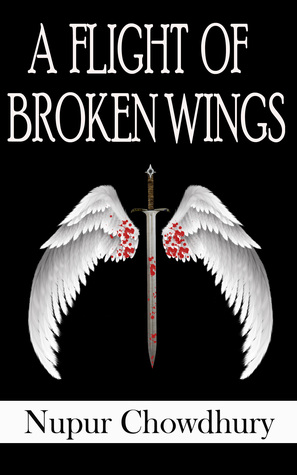 I received an ecopy from the author in exchange for an honest review.

Six hundred years ago, humanity rose up in revolt against the Aeriels, who were driven from earth and back into their homeland of Vaan after a bloody and glorious war. Eight years ago, Ruban’s home was destroyed and his family murdered by an Aeriel. When a new Aeriel threat looms over Ragah, the capital city of Vandram, Ruban Kinoh must do everything in his power to avenge his family's past and protect the future of his country. Which is hard enough without being saddled with a pretty and pompous aristocrat, who seems as useless as he is vain. Faced with a conspiracy that might cost humanity its hard-won freedom, and accompanied by the bejeweled and glitter-clad Ashwin Kwan, Ruban begins his journey into a land where the past and the future intertwine.

I'm glad I took a chance on A Flight of Broken Wings(The Aeriel Chronicles #1) by Nupur Chowdhury. It's really a breath of fresh air and I've never read anything quite like it. It starts off a little slow, but I'm glad I stuck with it and found myself pleasantly surprised by just how much I enjoyed it. Chowdhury's world-building is captivating. I enjoyed getting to know the world of our cast of characters. Although it's clearly a separate fantasy world, I liked seeing that there are some alternate modern day Earth elements included like cellphones and televisions. That kind of threw me for a loop at first, but I decided I liked that surprise quite a bit. I wish this book was accompanied by a map - that totally could have help clear up some minor confusion I had about locations. As for the characters, they're all well developed and come across as quite authentic. While Ruban is fantastic to follow even if he's kind of grumpy (which is totally understandable), I have to admit Ashwin quickly became the real standout. I wouldn't say no to seeing Ruban and Ashwin in a buddy comedy or an Odd Couple-esque movie as a matter of fact.

Overall, Nupur Chowdhury's A Flight of Broken Wings is a promising series opener with only minor issues. If you're looking for a refreshing fantasy with a twist and plenty of engaging characters, lush world-building, and good action sequences, I highly recommend trying it. If you also like stories about angels that are different, then you'll definitely have to pick this up. I'm looking forward to continuing this series. Thanks again for the opportunity, Ms. Chowdhury!