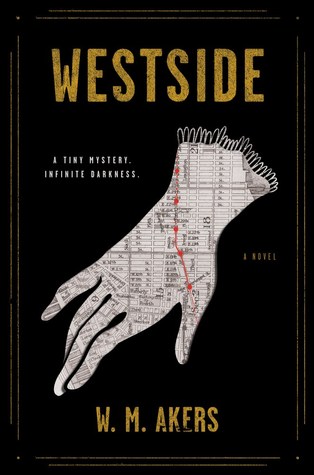 Even though the Westside of Manhattan is a dangerous wasteland that is inhospitable to modern (1920s) technology, home to strange magic and many disreputable residents, Gilda is proud to call it her home. Gilda is in a way a detective who specializes in "tiny mysteries" - those impossible puzzles and that keep you awake at night and chip away at you; questions that can ruin marriages and friendships. These cases distract her from her own grief and the impossible question of how her father died. The investigation of her newest tiny mystery about a missing glove leads her to a massive conspiracy that may even connect to her father's death.

Westside by W.M. Akers is a marvelous debut historical fantasy novel. There's so much to love about this story. It has nearly everything I could have asked for. I particularly enjoyed the well-drawn cast of characters (there are a lot of them). Gilda herself is quite engaging. I certainly appreciated her strong will and bravery. The alternate 1921 Manhattan's Westside is practically a character in its own right as well. Akers' world building is great and very visual. The story could have benefited from a map, though, but perhaps there's one in the final edition. The mysteries are so much fun to puzzle out with Gilda, especially in a setting where things and people have been known to just disappear like they never were. The author also does a good job handling the breathless action and all of the twists and turns (there is a lot going on) that will keep you right on the edge of your seat.

Overall, Westside by W.M. Akers is a fast-paced debut that will keep you turning the pages to keep up with Gilda. I have a feeling you will like the author's brand of historical fantasy with an engaging mystery and fully formed characters if you're a fan of Neil Gaiman and The Alienist by Caleb Carr. I can't wait to see what this author does next!

Westside by W.M. Akers was released on May 7th, 2019 and my review is also on Goodreads.  Thanks again, NetGalley!