I Spy the Boy Next Door by Samantha Armstrong (ARC) - Review 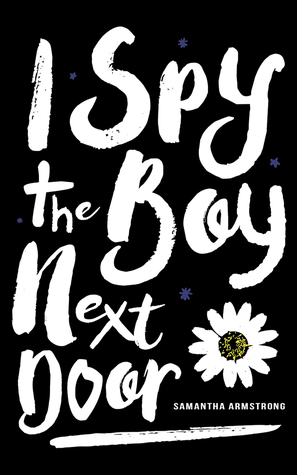 I received an ARC from the publisher, Koru House Press, in exchange for an honest review.

Four p.m. spy sessions are the highlight of Mallory Taylor’s day. Observing the boy next door—one with a body and an attitude to match—has her perched beside her window so often it can't be healthy. When she finally convinces her mom to let her go to public school, Mallory comes face to face with her neighbor, Troy Parker. And he makes it clear he wants nothing to do with her. His rejection awakens a newfound tenacity and maybe even a touch of recklessness. But when Troy starts to show up when she needs him the most, Mallory can’t help but wonder if there’s more to him than he’s let on. Taking chances, breaking rules, and following her heart is all new to Mallory. And no one warned her just how fickle hearts can be. When she discovers that Troy isn’t at all the guy she imagined him to be, secrets rise to the surface that will change her life forever.

I Spy the Boy Next Door by Samantha Armstrong sounded like it could be a fun YA contemporary, but overall it was just filled for too many cheesy cliches for my tastes. I mean, the whole incredibly naive girl who has minimal social skills paired up with the stereotypical bad boy - tattoos, motorcycle, underground boxing ring, the whole nine yards. Seriously. Also, they're next door neighbors but they haven't spoken in five years - instead she's been spying on him. She really knows next to nothing, maybe even less than that, about him. I don't know about you, but the spying thing got a bit creepy - that's not to mention the sneaking into bedrooms business. Anyway, this novel just wasn't quite for me. Maybe if I were younger or more romantically inclined? The only part that found myself really interested in was that pretty big plot twist about the bad boy neighbor and his family - gotta say I wasn't inspecting that. If only it didn't come so far out of left field and wasn't as rushed.

Overall, I Spy the Boy Next Door just wasn't quite in my wheelhouse even though I thought it may have been. If you're a fan of light YA contemporary romance that's packed with cheese and stereotypes, you may end up liking this novel more than I did. Thanks anyway to the publisher for the opportunity.


I Spy the Boy Next Door by Samantha Armstrong was released May 25, 2019 and my review is also on Goodreads.