The House in the Cerulean Sea by T.J. Klune - Review 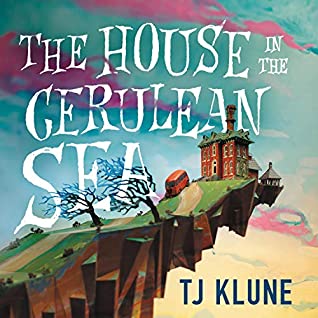 ❋ ❋ ❋ ❋ ❋
Linus Baker leads a quiet, solitary life. At forty, he lives in a tiny house with a devious cat and his old records. As a Case Worker at the Department in Charge Of Magical Youth, he spends his days overseeing the well-being of children in government-sanctioned orphanages. When Linus is unexpectedly summoned by Extremely Upper Management he's given a curious and highly classified assignment: travel to Marsyas Island Orphanage, where six dangerous children reside: a gnome, a sprite, a wyvern, an unidentifiable green blob, a were-Pomeranian, and the Antichrist. Linus must set aside his fears and determine whether or not they’re likely to bring about the end of days. But the children aren’t the only secret the island keeps. Their caretaker is the charming and enigmatic Arthur Parnassus, who will do anything to keep his wards safe. As Arthur and Linus grow closer, long-held secrets are exposed, and Linus must make a choice: destroy a home or watch the world burn.
I'm so happy I've finally had the opportunity to read The House in the Cerulean Sea by T.J. Klune. I've seen it floating around the blogosphere so much this year that by the time my library audiobook hold finally arrived my expectations for it were absolutely sky high. Now that I've officially finished it, I can easily say that it is one of the best novels I've had the opportunity to experience of 2020. Just saying that I read it or listened to it feels wrong somehow - the novel just has to be experienced. After how crappy this year has been, this hit all the right notes for me. Seriously, it's exactly as amazing as everyone has been making it out to be.

It's incredibly sweet, clever, creative, heart-warming, magical, enchanting, funny, emotional - I could keep going, but take my word for it when I say that it's truly lovely. Found family is one of my favorite tropes in fantasy and sci-fi and what Linus finds between Arthur Parnassus and the magical children of the Marsyas Island Orphanage is top of the line. They're all there for each other and quite supportive of one another. I'm not a hugger, but I just wanted to give them all a warm hug. Linus, Arthur, and all of the kids are so unique and well-drawn that they could walk right off the page. Linus in particular has a great character arc. He's quite a different person from where it starts to where it ends. Their world deals with some pretty heavy real world issues, but it was marvelous to visit and yes, I wish I was there too. I honestly didn't want to say goodbye and I'm certainly experiencing quite the book hangover. I already wish I could experience it all for the very first time. By the way, Daniel Henning gives an awesome performance as the narrator and he brings Klune's world to life splendidly.

Overall, I can't recommend The House in the Cerulean Sea by T.J. Klune enough. I know my review hasn't been able to do this adult fantasy standalone the proper justice, but trust me when I say you need it if you haven't already had the chance to do so. It's ending is fantastic, but I wouldn't mind a future spin-off featuring the kids a few years down the line. If you're a fan of The Umbrella Academy, Miss Peregrine's Home for Peculiar Children, and Harry Potter with a dash of 1984, I have a feeling you'll adore this story too. I can't wait to read whatever T.J. Klune cares to write in the future and to catch up on his backlist.

My review is also available on Goodreads.