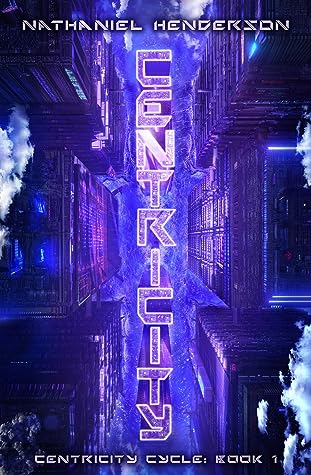 In a condemned hotel, an intelligence operation to retrieve a DNA-altering bioweapon goes horribly wrong, sparking a scandal that could bring down an agency... and a city along with it.

Adasha Denali resolves disputes for Naion—using words, not weapons. But with her agency under fire and her mentor fed to the wolves, she’ll have to get her hands dirty. Racing to discover who’s undermining Naion’s security and why, Adasha runs headlong into corporate mercs, an engineered spy, and a man losing his mind to a new form of intelligence.

Meanwhile, the once-great immersion hacker Neon Nik is on the ugly side of broke, struggling to pay off circling loan sharks. When he inherits a piece of advanced tech that throws him into Adasha’s path, threats of dismemberment become the least of his problems. Now he’s got a vortex of hired killers on his heels and a decision to make: sell out or suit up.

I'm glad I took the chance on Centricity (Centricity Cycle #1) by Nathaniel Henderson when I saw it appear on Reedsy Discovery.  I am always on the look out for a good new science fiction novel and this cyberpunk series opener really hit the spot for me.  It easily earned a full five star rating from me and it is now on the list of my favorite reads of 2020.  Nathaniel Henderson does a brilliant job of mixing some of my best elements of cyberpunk, thriller, and even spy-fi.  I don't often have the opportunity to read from the spy-fi subgenre, but this book really helped remind me just how much I enjoy it when I get that chance because it is so full of possibilities.

There's so much to like about this novel since it has a little bit of something for everyone.  My favorite aspect by far, though, is the world that Henderson created for this novel.  His impressive brand of world-building is entirely captivating and during my reading experience I felt like I could have stepped right into the world his characters inhabit.  I also greatly appreciated that the story is a complex and fast paced read that really makes you think.  The author also does a marvelous job of writing all of the action sequences.  It's an intense read that keeps you right on the edge of your seat waiting to see what happens next.  Luckily for me, it was not at all predictable and it really keeps you guessing with many unexpected twists and turns.

Overall, Centricity (Centricity Cycle #1) by Nathaniel Henderson has a lot to wrap your mind around but it is well worth your time.  It also has a little bit of something for everyone from fantastic world-building, an intriguing cast, imaginative sci-fi elements, to great action.  I bet you'll feel right at home in the world of Centricity if you're a fan of Blade Runner and Snow Crash by Neal Stephenson.  I can't wait to see more from this series in the future and I'm looking forward to whatever else this author decides to write.

This novel was first released on October 20, 2020 and my review is also available on Goodreads.