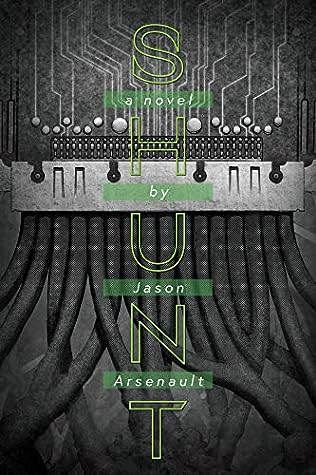 ​A young woman named Jade receives a brain implant that connects her to a “Pain Surrogate” in order to alleviate her grief from the loss of her little brother. At first the relief is ideal; the shunt seems like the perfect solution. But when things begin to feel unreal in her mind, she hires a hacker to discover the identity of her anonymous pain recipient. This seemingly minor breach of security unravels an international conspiracy between PrimaCore, a huge pharmaceutical company, and a military eager to weaponize the feeds from pain surrogates with pathologically violent urges. Jade’s quest to find her surrogate sends her on a wild adventure across the globe with black operatives hot on her trail. Meanwhile, an enhanced rogue agent within PrimaCore seizes the opportunity to topple the government, seeking to usher in the kind of world that she believes we all deserve.

Shunt by Jason Arsenault is a new futuristic science fiction release that based on the synopsis sounded like it was going to be exactly right up my alley.  Plus, it's cover is quite eye catching.  I was really interested in picking it up since it had so much potential to be an intriguing novel.  Overall, though, it just was not for me.  The first couple of chapters started off pretty strong, but the more I read of the story the more the characters and style began to grate on my nerves.  There were a few moments where I considered quitting the novel altogether and saving myself a bit of a headache actually, but I decided to stick with it.  Like I said, there were enough positives to hold my interest.

Before going into what bothered me about it I'll start off with the positives.  First, it's consistently a quick and engrossing read that draws you in from the opening.  You can't help but want to speed your way through it to find out what's going to happen.  Second, the idea of the shunt itself and the pain surrogate intrigued me right away.  There are so many possibilities for that concept in science fiction and the author puts forth some good ideas on the topic.  Finally, the third good element is the sense of suspense and thriller elements of the story.  These aspects of the novel certainly help make the novel such a quick read as I mentioned above.

Finally, I'd like to go into my core complaints with the novel and made this book a no-go in the end for me.  Going in I knew there was going to be some explicit content due to the Reedsy Discovery warning and generally speaking that's okay with me, but the style of some of the language is unnecessary.  In my opinion, some of the stylistic choices in terms of how some of the characters speak didn't add anything to the meat of the story.  Honestly, the only thing it really did for me was to add to my dislike of the cast and that only really grew over the course of my reading experience.  I didn't actually like any of the characters by the time I got to the end.  They mostly set my teeth on edge.  To top it off, there were many points where I noticed a lot of odd turns of phrase or word choices on the part of the author.  Each and every time that happened that pulled me out of the story a little more.

Overall, I really wanted to love Jason Arsenault's Shunt, but it mostly didn't work out for me.  The positive aspects ended up being overshadowed by the negative.  The story has a good deal of potential, but it never quite lived up to it in the long run.  It just wasn't for me, but if you're interested in science fiction and suspenseful reads you still may want to give it a try.

Shunt by Jason Arsenault is being launched by Reedsy Discovery on December 9, 2020.  My review is also on Goodreads.