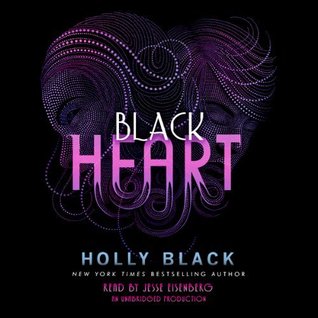 The Feds are willing to forgive Cassel's past crimes if he'll leave his family behind and go straight - and work for them, of course. They want him to get rid of a powerful man who is spiraling out of control. What separates the bad guys from the good guys if they want him to use his ability to hurt people. Now all of that puts Cassel on the wrong side of the law from Lila, the girl he loves, the daughter of a mob boss who can probably never love him back anyway given their history. That alone would be bad enough, if her father wasn't holding his mother hostage until she returns the priceless diamond she took from him years ago - now she just needs to remember what she did with it.

Black Heart by Holly Black is the perfect conclusion to The Curse Workers series. Although it isn't the most fast moving story, I was still fully invested in every moment. I couldn't get enough, and honestly, I wouldn't say no to more adventures with these characters. Each member of the cast has their own moment to shine. Cassel is such a fascinating character to follow. He's definitely a bad guy, but he's still good - which does actually make sense. I'm so pleased with the ending - it offers just the right amount of closure with just a bit of open-endedness. Overall, I highly recommend this series, especially if you're a fan of The Sopranos, Memento, Inception, gritty noir, and urban fantasy.