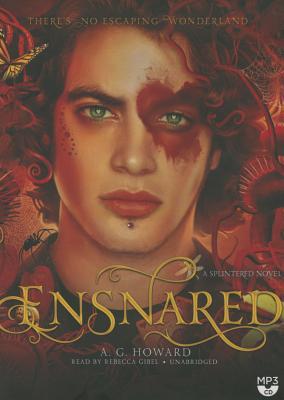 After the events of prom, Alyssa has embraced her madness and plans on saving her two worlds, her mother, and the two guys she loves, even if it means challenging Red and even if the only way to get to Wonderland since the rabbit has closed is through the dangerous looking-glass world. Alyssa, alongside her father, is going to right everything that has gone wrong. They just need to make sure that they come out of it alive and in one piece.

Ensnared by A.G. Howard, for the most part, is a good conclusion to the Splintered series. It wraps up the storyline neatly. I found it easy to be pulled in by with the visions of a ruined Wonderland, the politics surrounding the kingdom Alyssa will be ruling, and, of course, all of the manipulation. The characters are back in full force in this installment, too. Alyssa finds herself grappling with her humanity as more and more of her Netherling nature comes into play. Morpheus is about as Morpheus as it gets. The biggest surprise, Jeb actually becomes sort of interesting the more we see what he has had to go through to survive the looking-glass world.

Unfortunately, the love triangle really starts to bog down the story what with all of Alyssa's waffling between her two love interests, Jeb and Morpheus. If you thought that part of the story was annoying and overly done in the first two books, I'll warn you now that that aspect gets amplified in comparison. I mean, it is the final book - Alyssa will have to make a hard decision between her two suitors certainly? In the end, I wasn't surprised at all by the resolution of that dilemma, but I wish we wouldn't have gotten a double happy ending/ have your cake and eat it too type of conclusion. For all of the back and forth, I really wish she could have made a hard decision (or maybe have actually made a decision) rather than going for the best of both worlds option.

Overall, Ensnared is a good conclusion to this Alice in Wonderland retelling. It has many intriguing elements that make it worth checking out, even if you aren't all that interested in the romance angle. I expect I will be coming back for Untamed and its three post-epilogue novellas some time in the future.