March 14, 2016
Today is the cover reveal of Paula Berinstein's Amanda Lester and the Blue Peacocks' Secret.  This cover reveal has been organized by Lola's Blog Tours. 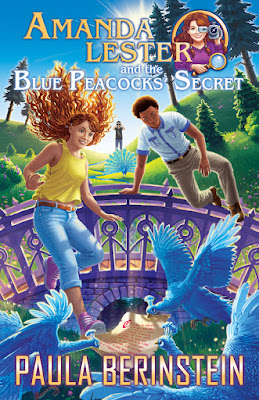 Blurb:
What does a dusty old secret have to do with peacocks? Everything, as it turns out. When Amanda is knocked off her skateboard by a rare all-blue peacock, she learns that the species harbors a vital secret she must race to uncover. But before she can unravel the mystery, a startling archaeological discovery turns all of Britain against the detectives and threatens their very existence.

As old enemies gather strength and new adversaries emerge, Amanda finds herself dealing with hysterical teachers, a disappearing mentor, a mysterious poisoner, and a would-be magician. With so much at stake and so little time, the last thing she needs is to fall in love.


On Monday Amanda and her friends had their first class with the new logic teacher. It was a scary affair. The pirate was rude, strict, and humorless, and now he smelled like cigars. Probably drank grog too, by the look of him, Amanda thought, whatever that was.
The first thing Professor Darktower said, in a really loud voice, was, “Alice in Wonderland is not fun!” No introduction, no “Good morning,” nothing. The statement was so abrupt and the message so out of any context that every kid in the class dropped something, gasped, choked, or bit their tongue, even if they weren’t chewing. Then he said, “In this class we will read nothing but Lewis Carroll—Alice’s Adventures in Wonderland, Through the Looking Glass, the whole shebang. These publications are no laughing matter. You think Tweedledum and Tweedledee are funny? The Mad Hatter is a joke? Alice is cute? BALDERDASH!”
This extremely loud exclamation caused poor Dreidel to fall off his chair and twist his knee. But Professor Darktower would not let him go to the nurse. “Detectives are not sissies,” he said. “You will stay here and learn to be absolutely, impeccably logical. Got that?”
The boy nodded up and down and attempted to hide his pain. It was obvious that he was hurt, though, because he kept grimacing every time he tried to move his leg. Amanda was so outraged that she refused to keep quiet. “He’s hurt. He needs medical attention.”
The huge man fixed her with a stony stare and said, “Then he’s out of my class. Do you think, missy, that when you’re out battling the likes of Blixus Moriarty you can take a time out and go to the nurse? Now stop acting like a girl and be a detective. And as for you, laddie, one more sissy incident like this and you’re out of my class. Got that?”
Dreidel nodded again but Amanda was furious. She opened her mouth to protest, but Ivy tugged on her sleeve and gave her a low “Uh uh,” and she realized that her revenge would have to wait. But revenge she would have, and it would be a doozy. The man was worse than a boor. Why, he was even ruder than an arch-criminal. Even Blixus had never been as bad as that. She wondered what Professor Darktower’s parents must be like to produce a son like him.
There was something she could do right then and there, however. She reached into her bag and surreptitiously texted Dreidel: “R U OK?” “Y,” the response came almost immediately. Of course he would say that. Dreidel was a trouper. And then it hit her that he hadn’t gone off to Skye after all. She was glad, not just because he’d stayed to support Legatum, but because he was a good guy and a great lab partner. She texted back a smiley and let it go for the time being.
Darktower glared at the class and said, “As I was saying, there are equations and syllogisms in these volumes that underlie every word, and we’re going to find them. You will be responsible for finding them. Then, for your term paper, you will be expected to arrange them in a different way that’s still logically valid and write the text they would produce. Is that clear? I repeat: this task is not humorous or fanciful. It is deadly serious work, and you won’t be able to build ironclad cases unless you can master it.”


You can find Amanda Lester and the Blue Peacocks’ Secret on Goodreads.

You can pre-order Amanda Lester and the Blue Peacocks’ Secret here on Amazon. 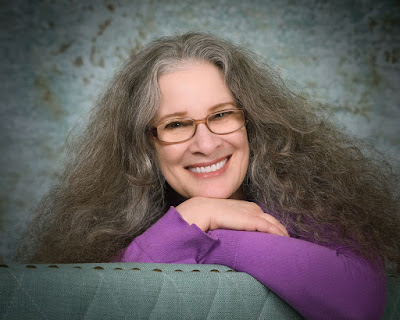 Paula Berinstein is nothing like Amanda. For one thing, she’s crazy about Sherlock Holmes. For another, she’s never wanted to be a filmmaker. In addition, compared to Amanda she’s a big chicken! And she wouldn’t mind going to a secret school at all. In fact, she’s hoping that some day she’ll get to build one.

There is a cover reveal wide giveaway for the cover reveal of Amanda Lester and the Blue Peacocks’ Secret. These are the prizes you can win:
- a 50$ amazon gift card 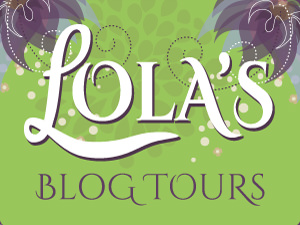