The Circle by Dave Eggers - Review 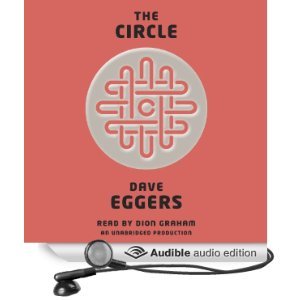 Mae Holland, a young and disgruntled utility company employee, snags the job at a lifetime at The Circle, a huge internet company that is one of the most influential companies in the country. Annie, one of her old college friend's and currently high-up at The Circle, put in a good word for her. Working for The Circle is something along the lines of working for Google or Facebook. She's absolutely thrilled by the work and all of the opportunities that the company offers to its employees. Although her work keeps her life outside of The Circle distant, a strange meeting with a coworker leaves her shaken, and her role at the company becomes more and more Transparent and visible to the public, she finds herself falling in line with everything The Circle stands for and is really anticipating the inevitable day The Circle completes regardless of what it means for the world at large.

Since I'd like to see the upcoming movie adaptation starring Emma Watson and Tom Hanks, I wanted to give the source material of the movie that's promoted as a five minutes in the future drama thriller. Initially, I really liked the concept of the story and it offers an intriguing hook as it's setting up a sort of pre-dystopian 1984-esque up-to-the-minute commentary on social media. Mae's story and The Circle intrigued me enough that I needed to know how it all ended although I had two primary issues with the book.

The first of my two main issues is that the book if far too long at nearly fourteen hours worth of listening (or nearly 500 pages). I suspect it could easily be trimmed down 150 pages to near 350 instead. As the story stands, it isn't actually all that much of a thriller. I will admit it has it's moments, especially nearer to the end, and there are some times when tonally you feel that The Circle isn't everything that it's cracked up to be. However, that doesn't happen enough for me here - I would have preferred more tension to reel me in and hold me.

Secondly, my other key issue is Mae herself. While I didn't exactly like her to begin with, the more I stuck with her the more she really began to grate on my nerves. She starts off as fairly intelligent woman and turns into an incredibly shallow, selfish, and paranoid kid. She doesn't have a much in terms of character growth (or what she does get, she manages to tamp down). She just eats up whatever The Circle tells her regardless of what she could plainly see if she focused on something more than her next zing, smile, or frown. Mae's one of those characters that you just want to slap some sense into their thick skull. There are so many other fascinating characters in the novel that I would have preferred to have followed instead of Mae, to say the least. Luckily, though, I will say the narrator does a great job of bringing Mae and the rest of her fellow Circlers to life.

Overall, I really like the concept behind The Circle by Dave Eggers, but, after it was all said and done, the final product is a bit of a let down. For a twisty pre-dystopian thriller, it should definitely offer more tension, thrills, and less predictability. Plus, a POV character that I wanted to root for on her journey up the corporate ladder and into the shady side of the corporation. If you're interested in dystopian novels set just before the new regime takes over, you may be interested in this timely social media tale that begins to channel the classic, 1984. I'm just hoping that the movie can do the concept justice.