Happy Tuesday everyone!  Today I'm sharing two ARC mini reviews with you: The Girl the Sea Gave Back (Sky in the Deep #2) by Adrienne Young (available September 3rd, 2019) and Loki: Where Mischief Lies by Mackenzi Lee (available September 3rd, 2019).  I received these ARCs from NetGalley in exchange for honest reviews.  I won Young's second outing from the Goodreads Giveaway program and Lee's Marvel novel from NetGalley in exchange for an honest review.  Read on to see my thoughts of both of these books:

The Girl the Sea Gave Back by Adrienne Young is a pretty great companion novel to The Sky in the Deep.  It's set approximately ten years later and one of our two perspective characters is Halvard, the little brother of Fiske, and the other Tova, a brand new character.  Of the two, I was easily the most invested in Halvard, primarily since we get to see him all grown up now.  It's an interesting ride seeing how his life's been treating him since the last time we saw him.  Tova is a great character herself.  I appreciated her determination and her character arc over the course of the story.  I've always enjoyed Viking stories and this is no different, especially when it comes to Young's world-building and action.  Young's writing style here drew me in just as quickly as her debut.  My only complaint with this companion, though, is that sometimes keeping track of the time jumps could be a bit confusing.  Overall, I recommend The Girl the Sea Gave Back if you enjoyed its companion and are interested in the Vikings and Norse Mythology.

My review can also be found on my Goodreads. 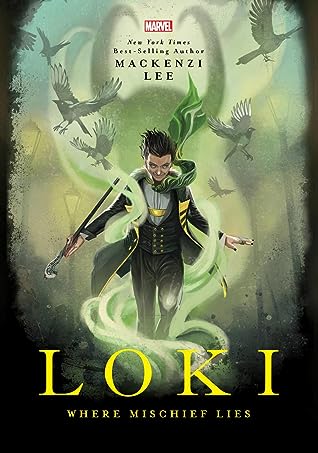 Loki is one of my favorite characters of the Marvel Cinematic Universe and in Norse mythology as well.  I'm not very familiar with his comic book counterpart - yet.  So when I heard Mackenzi Lee was writing a young Loki novel set in the 19th century I was already sold.  I love her brand of historical fiction and somehow I managed to get approved for the ARC via NetGalley.  Luckily for me this was a great introduction to young Loki.  His voice is spot on and she has created a marvelous sibling relationship between him and Thor.  The banter between them, by the way, is pretty much perfect.  She also does a brilliant job with Frigga as we learn more of Loki's relationship with his mother who helped train him in magic.  As for Loki visiting Victorian era London, it's clear that Lee has done her research on the time and place.  I also appreciated that she discusses the LGBT+ community there in comparison to Asgard's open mindedness and Loki as genderfluid.  Overall, you will absolutely need Loki: Where Mischief Lies by Mackenzi Lee if you loved her Montague Siblings series, Norse mythology, and Tom Hiddleston's portrayal of Loki in the MCU.  I can't wait to see what happens in the next two installments of this projected series.  Mackenzi Lee is quickly becoming one of my favorite authors.


What have you been reading?  Are you looking forward to either of these books?  As always, thanks for visiting my blog and perhaps even commenting down below!