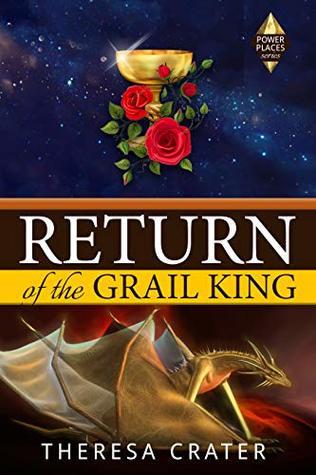 I received an eAudiobook copy from Amanda Abeillan, the narrator of the audiobook edition of this novel, via Audible in exchange for an honest review.

Anne Le Claire won’t let being the descendant of a family of ancient mystics stop her from being a good mom. When her husband Michael is called away to explore an Egyptian cave-in near the due date, she hopes she can hold off on the delivery a few days longer. Little does Anne know that destiny has a plan for her baby, but a powerful enemy wants to delay the epic reincarnation… indefinitely. Michael Levy hopes he can explore the Giza plateau site quickly and return to the opulent Le Clair family mansion post haste. With time running out before his child is born, a statue of the god Anubis comes to life and takes the Egyptologist on a detour through legendary Arthurian history. When he learns that he and Anne were responsible for a grand betrayal in another lifetime, the only way to right the wrongs of the past is to travel through time. As an unspeakable evil puts the family fortune and their unborn child in grave danger, the help of Anne’s magical grandmother may not be enough to save the day. But will enlisting a modern-day Merlin counter a devious plot against Anne and Michael that’s been centuries in the making?

To be honest, I was instantly sold on Return of the Grail King by Theresa Crater as soon as I heard Arthurian and Egyptian mythology plus time travel all in the same sentence. I didn't know how Crater could make it happen, but I sure wanted to find out. I was also informed that this was actually the third book in the Power Places series, but that even though I wasn't familiar with the first two novels it wouldn't be difficult or confusing to follow Anne Le Claire's story. Luckily for me, this novel mostly worked for me. I enjoyed getting to know Anne, her family, and the world she lives in. It was very cool to see how the author combined what would usually be two completely separate mythologies to work together. Yes, there were times that I felt just a little out of the loop, but that didn't lessen my enjoyment of the story otherwise. I particularly enjoyed all of the parallels from the time periods and watching everything come together. As for the production of the audiobook itself, Amanda Atkins does a good job of bringing the cast to life and making me feel for their stories.

Overall, Return of the Grail King (Power Places #3) by Theresa Crater is a must read for readers interested in urban fantasy, time travel, reincarnation, and Arthurian and Egyptian mythology. I will definitely be going back to read the first two novels in this series, Under the Stone Paw and Beneath the Hollow Hill, in the future so I can fill in the minor gaps and things I must have missed by jumping directly into the third book in a series. Thanks again, Amanda!

I listened to Return of the Grail King by Theresa Crater on audiobook on September 5, 2019 and my review can also be found on Goodreads.