The Vanity of Hope (Apostle #1) by Graeme Langdon - Review 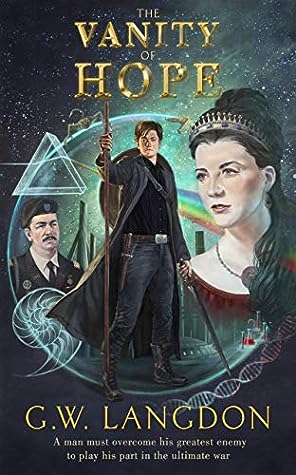 I received an ecopy from Reedsy in exchange for an honest review.

1499 A.D. Thomas Ryder is a medieval gamekeeper with a lot on his mind. Where did he fit in the world of Nature? Would he ever be at peace? What was the alien’s final move? Abducted from Alice Holt Forest, along with his partner, Sarra Chambers, he is taken to the hyper-technology planet of Heyre and trained by superior beings to be their Great King against an encroaching, undefeated destroyer of worlds. As his knowledge grows beyond that of any human who has ever lived, his inner world becomes increasingly chaotic. The reality-distorting technologies of artificial intelligence, bio-mech integration, genetic manipulation, and virtual reality lead him to question the very nature of what it means to be human. Inferior to all around him, he is feted as a savior king by deed of his mysterious connection to a supernatural creature whose subtle presence points to a greater and more ancient war? Can one man save the world? What hope for a lasting peace of mind? Will Thomas Ryder survive the Great War of mortals to play his part in the ultimate conflict?

The Vanity of Hope (Apostle #1) by Graeme Langdon has so much potential as a brilliant science fiction series opener. It didn't quite manage to live up to my overall expectations by the time I reached the end for a variety of reasons, but it still has quite a few cool elements that I enjoyed. In this story, Thomas Ryder, a gamekeeper from Medieval England, and his wife Sarra get kidnapped from their home world by aliens. These aliens take them to the planet of Heyre, where they train Thomas to become a savior against a villain that is bent of destroying worlds upon worlds. Understandably, his world changes forever once his knowledge begins to far surpass anyone in the history of Earth. The aliens have opened his eyes to the point that he truly begins to question his life and his role as a part of this new world, as well as his now ever changing relationship with Sarra. Thomas has a lot on his plate survive the oncoming war and live up the destiny laid out in front of him. If that doesn't sound like an intriguing premise, I don't know what would. There's so many fascinating places that the story could go

My favorite aspect of this novel are all of the thought provoking questions that Thomas (and Sarra, too) have no choice but to answer or to at least consider. It's fascinating to see Thomas grappling with everything being thrown at him - from aliens, new worlds, the prospect of destiny, and all of these incredibly high tech items that are part of regular life on Heyre. As you might expect, it's a lot for him to reckon with and all of his newfound knowledge weighs on him. I also found myself intrigued by how the author portrays the life Thomas and his wife left behind back on Earth versus their new found life, especially when it comes to these alien beings. It isn't often that we have a sci-fi story that features incredibly bleeding-edge high-tech aliens plus Medieval humans. Like I said earlier, this story mostly hit the right notes for me but there are somethings that didn't really work for me. The first thing which was an ongoing issue for me was that I always felt somewhat out of the loop. It was like I missed a key part of the story right from the first couple of chapters. I also would have preferred the perspectives not to switch back and forth as often as they do throughout the novel. I honestly would have preferred that the story was either fully told from the perspective of either Thomas himself or one of the alien kidnappers. Or, at least, I would have preferred story shifts that were somewhat less jarring than necessary.

Overall, I do recommend The Vanity of Hope (Apostle #1) by Graeme Langdon to fans of sci-fi that asks big questions and has a wide scope. If you are also interested in Medieval English history, this could also be fun to see how characters from that time period react to technologically superior beings. I haven't decided if I'd like to continue this series or not, but I'm glad I decided to give this unique novel a try.


My review is also on Reedsy and Goodreads.