Happy Sunday everyone!  I hope everyone's staying safe and healthy.  Today, I thought I'd share the books I've bought since January and a couple of other goodies.  I got lucky and caught some great online deals, bargain outlet specials, and local friends of the library book sales since the first half of this year.  Without further ado, here we go: 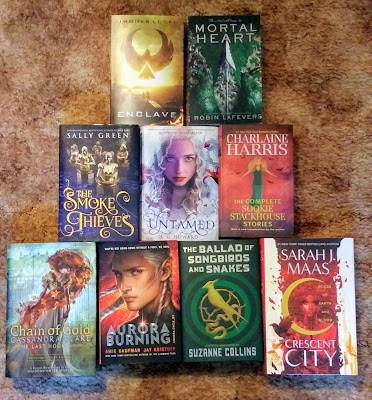 Enclave by Thomas Locke - I just stumbled upon this 2018 dystopian post-apocalyptic novel and it really caught my attention.

Mortal Heart (His Fair Assassin #3) by Robin LaFevers - I've enjoyed what I've read of this series so far and I'm looking forward to seeing how the series wraps up.

The Smoke Thieves (The Smoke Thieves #1) by Sally Green - I really liked The Half Bad Trilogy and I've been looking forward to trying her new fantasy trilogy.  I jumped at the chance to pick this up when I saw it on sale for $2.

Untamed (Splintered #3.5) by A.G. Howard - I enjoyed this Alice in Wonderland retelling series and I'm interested in trying these three stories collected here.

The Complete Sookie Stackhouse Stories by Charlaine Harris - This urban fantasy series is a favorite (well the first nine books anyway, the rest of the series went downhill after that), but these shorts span the series so it'll be fun to return to the world of Bon Temps.

Chain of Gold (The Last Hours #1) by Cassandra Clare - I'm addicted to the Shadowhunter books and I'm very excited to jump into a new series.  I'm especially excited to see more of Anna Lightwood since I quite liked what we saw of her in Ghosts of the Shadow Market.  I'm actually caught up on all the others books of this universe so I hope to get to this one very soon.

Aurora Burning (The Aurora Cycle #2) by Amie Kaufman and Jay Kristoff - These two writers make quite a team and I can't wait to see what's next for Squad 312.  Plus, look at that cover - isn't it cool.

The Ballad of Songbirds and Snakes (The Hunger Games #0) by Suzanne Collins - I've heard a lot of conflicting reviews for this from negative to positive, but of course I have to decide for myself and hopefully soon.

House of Blood and Earth (Crescent City #1) by Sarah J. Maas - I've just recently finished up Kingdom of Ash and I need more from Maas stat.  Her brand new adult fantasy series opener sounds like it will be brilliant. 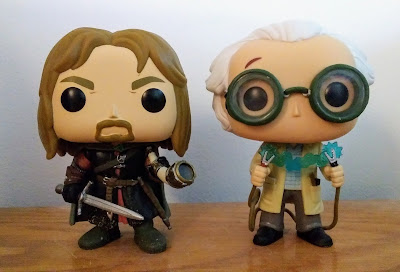 I found these two Funko Pops at that bargain outlet I was talking about - Boromir from the Lord of the Rings and Doc Brown from Back to the Future.  Aren't they awesome?  I had no idea they made Back to the Future ones until I saw this Doc.  Now, I'll be on the look out for more figures from both series.  Boromir and Doc are now on the shelf next to my Han Solo and Gomez and Morticia Addams Funko Pops.

Now these next two photos feature what I picked up from a local friends of the library book sale - they've just started up for the season within the last couple of weeks and they're running a special to stuff a plastic bag $5.  I managed to fit 13 books (and a few dvds on top of all that) in my bag - I think I found some real treasures.  I was only really familiar with just of few of these and the others I decided to take a chance on since they looked so tempting. 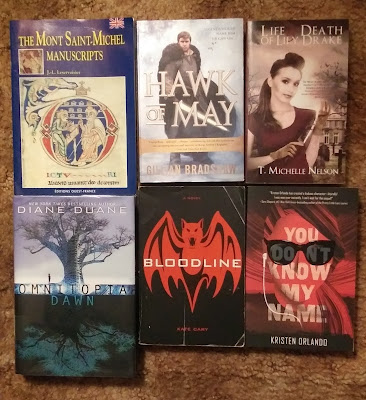 Hawk of May (Down the Long Wind #1) by Gillian Bradshaw - I'm always ready for an Arthurian retelling and this one features Gwalchmai, aka Sir Gawain.

Life and Death of Lily Drake (Lily Drake #1) by T. Michele Nelson - This sounds like a fun urban fantasy series opener that's along the lines of the Southern Vampire Mysteries. Turns out this book is signed by the author and everything - I hope Carol (whoever that is) liked it!

Omnitopia: Dawn (Omnitopia #1) by Diane Duane - I love the Young Wizards series and I need to read more of Duane's work - this will be a bit of a change because this is cyberpunk sci-fi novel that sounds a bit like Ready Player One.

Bloodline (Bloodline #1) by Kate Cary - It's a WWI set YA retelling of Dracula from 2005.  Could be something here!

You Don't Know My Name (The Black Angel Chronicles #1) by Kristen Orlando - A secret spy YA thriller?  Sounds like it could be fun. Plus, I enjoyed Tinker, Tailor, Soldier, Spy so any time I see a tagline remotely similar to that I'm hooked. 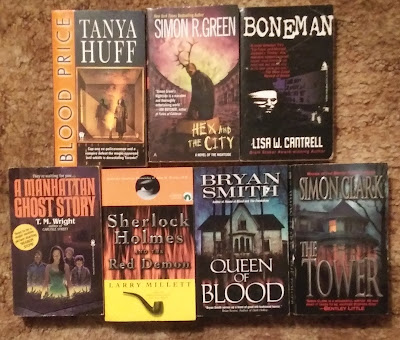 Blood Price (Vicki Nelson #1) by Tanya Huff - Somehow I've never read a book from this author and this urban fantasy series sounds like it could be fun. I've seen little snippets of the tv adaptation, Blood Ties, and it looks pretty good. Maybe I'll have to give that a try too.

Hex and the City (Nightside #4) by Simon R. Green - This series sounds so cool and I really need to get caught up.

Boneman by Lisa W. Cantrell - Detectives investigating a drug dealer who's drugs seem to be turning people into literal zombies?  Sign me up.

A Manhattan Ghost Story (Manhattan Ghost Story #1) by T.M. Wright - That sticker on the cover of this 1984 edition says that it's soon to be a major motion picture starring Sharon Stone.  Turns out the movie fell through and never happened.  Apparently not too many of them have that on the front...

Queen of Blood (House of Blood #2) by Bryan Smith - I might just have to dig up book one first to really enjoy this - oh well.


Congrats for making it this far!  What books and treats have you picked up lately?  Have you read any of these before?  Have any of these caught your eye?  As always, thanks for visiting my blog and perhaps even commenting down below!