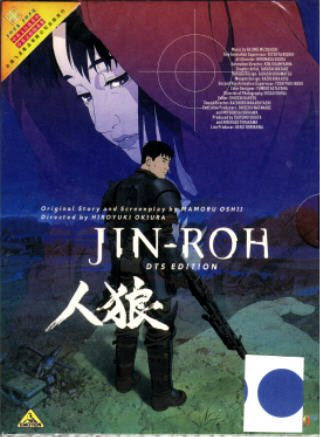 I really lucked out last weekend when I found this alternate history gem at a yard sale!  The movie follows Kazuki Fuse, a special unit armored police officer who fails to shoot a young girl who happens to be a bomb runner for rebellious rioters.  The girl commits suicide by detonating the bomb, nearly killing Fuse who is standing right in front of her only saved by his full body armor.  After an inquiry, Fuse is sent back to basic training for a complete re-evaluation.  Later, when Fuse visits the grave of the girl, he sees a girl, standing in front of the grave who looks remarkably like the victim.  He learns that this girl is Kei, the suicide's sister, and she doesn't blame him for what happened.  Fuse and Kei, then begin to develop an interesting relationship.  However, nothing is exactly as it seems for Kei or Fuse in this intense, yet deliberately paced film.  I don't want to spoil anything, but it's plots within plots within plots!  If you love beautiful hand-drawn animation with a high level of detail, this might be the movie for you!