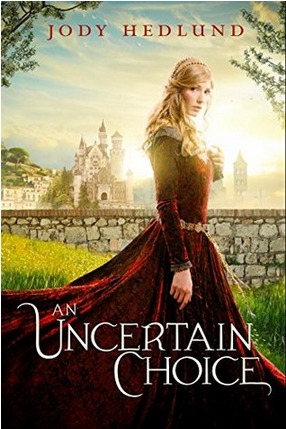 Lady Rosemarie Montfort, ruler of Ashby, knows that she will become a nun - while still able to rule her people - on her eighteenth birthday. Due to fertility issues, her parents took the Ancient Vow of Hannah with the Abbott Michael so they might receive a Tear of the Virgin Mary in order to have their own child. The price - this Vow - says that once their first-born child turns eighteen their life is to be lived in service to God, or die. Turns out her godfather, the Noblest Knight and brother of the High King, has found a loophole in the Vow. If Rosemarie finds True Love and gets married before her eighteenth birthday, she will not have to become a nun and cloister herself away. Good thing her godfather brought the three bravest (and most handsome and eligible) knights in the land with him. She has one month to choose between the three knights competing for her heart - or become a nun. As she begins to realize she may not be cut out for nun life after all, the competition begins to turn foul and the knight who has captured her heart appears to be the guilty party.

I've never read anything by Jody Hedlund, but I picked up An Uncertain Choice because I enjoy stories set in a medieval period whether they're historical fiction or fantasy - in this case, it's a historical fiction set in 1390 (although we don't get many details regarding the time period). Going in I liked the concept - knights, intrigue, adventure, romance - what's not to like there? Unfortunately, there were quite a few issues that kept me from enjoying this as much as I hoped.

My main problem is with the characters, especially Lady Rosemarie. She cares about her people, wants to due her duty, and is stunningly beautiful with blonde hair that falls below her waist. Otherwise, she isn't very interesting and she's not all that bright either. The rest of the cast, including the three love interests, are all quite flat and two-dimensional.

Another issue I have is with the predictability of the story. I pegged the villain right from the outset and was just waiting for everyone else to catch up, but they didn't until the very end. It's not like I took any great mental leaps because it was all extremely obvious. I wish there were a twist that would have surprised me.

Finally, I knew this was a romance going in, but it turns out it's the kind that overpowers everything else going on in the story. It's focuses on the love rectangle and instalove, at that, between Rosemarie and the knights. Well, they do have a month, but it's still pretty obvious which knight she prefers early on.

Overall, An Uncertain Choice is a quick, light romance that doesn't want you to think too hard about anything.