July 21, 2015
Welcome to the first day of the Forsworn by Emily Wibberley Blog Tour Plus Giveaway! Forsworn is the second novel of The Last Oracle series.  Today, I'll be sharing with you a playlist created by the author for the series, information about Ms. Wibberley and ways you can connect with her, summaries of both books in the series including purchasing links, a Rafflecopter giveaway, and the links to the other blogs participating in this tour.  Thanks very much for visiting my leg of the blog tour! 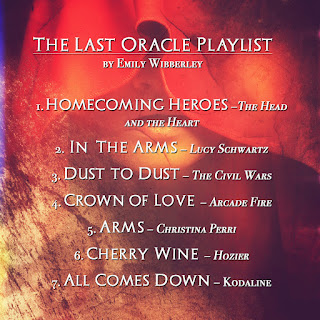 Emily grew up in the South Bay where she spent her formative years battling zombies on her Xbox, watching Buffy the Vampire Slayer, and voraciously reading everything from The Hunger Games to Jane Austen, where her love for feisty young heroines was born.

After graduating from Princeton University Magna Cum Laude in 2014, she began writing. Her debut novel, Sacrificed, was named a finalist in the Young Adult category of the 2015 International Book Awards, the Young Adult category of the 2015 Beverly Hills Book Awards, and in the Young Author category of the 2015 Next Generation Indie Book Awards. Since its release, Sacrificed has spent more than four months as a Kindle Top Ten Teen and Young Adult Bestseller.
When she isn’t reading the latest YA book, Emily enjoys watching kick-butt action movies with her two rescue German Shepherds, Hudson and Bishop, named after characters from James Cameron’s Aliens.
Sign up for her mailing list to hear about exclusive giveaways and news about the upcoming release of The Last Oracle III as well as other young adult books she’s writing.

Sacrificed: The Last Oracle Book I 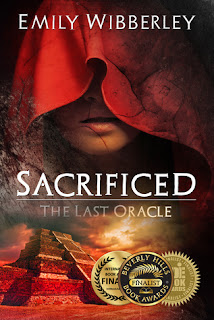 Knowing the future can save her city – but not her heart.
Born to serve the merciless Oracle, Clio wants nothing more than to break free. But when her entire family is murdered by Mannix, the king’s adviser, Clio inherits the Oracle’s power, a power she never wanted and doesn’t understand.

Hunted by Mannix, Clio is forced to flee her home in Sheehan and seek refuge in a foreign city where oracles are forbidden. If she’s found out, she will be sacrificed atop its great pyramid.

Clio has no choice but to win the trust of Riece, an enemy warrior. Despite the undeniable attraction between them, Clio knows that if he finds out who she really is, he won’t hesitate to execute her.

Clio tries to hide her budding powers, but the Visions she keeps having of Mannix and his barbarian army
slaughtering her people torture her conscience. She alone has the strength and foresight to stop him, but only if she can embrace her destiny and sacrifice everything. 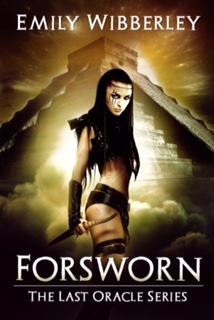 Clio can see the future, but what she doesn’t know about her past could destroy her.
It’s been a year since Clio made her sacrifice to the Deities and embraced her destiny as the Oracle to save her people. The only family she has left is a brother who wants her dead. The prince, her oldest friend, is a king with his own agenda. And the man who once loved her, now hates her.
All she can do is try to forget about Riece, the enemy commander whose heart she broke to save his life, as she serves the Deities. Her days are filled with Visions and bloodshed in a never-ending war against the Untouched. To add to her problems, she must pose as King Derik’s mistress to conceal her forbidden powers from the Emperor’s spies.
When Riece unexpectedly returns to Sheehan with a new and beautiful ally, Clio knows she must put him out of her mind once and for all, but first, they are thrust together into battle against a mysterious Untouched warrior with otherworldly power. To reclaim her city, she must team up with the man she hurt, the man she still loves but can never be with, and finally confront the questions about her origin—questions with answers that Clio may not be prepared to face.
Buy Now:
Kindle
Amazon
Barnes and Noble
Book Depository

Buy Forsworn between July 21st-July 28th to receive an exclusive short story: The Commander, by Emily Wibberley, which gives you a peek at Riece’s feelings when he first met Clio in Sacrificed.

Email your receipt to thelastoracleseries(at)gmail(dot)com to claim your prize.