The Friday 56 (With Book Beginnings): The Further Adventure of Sherlock Holmes: The Albino's Treasure by Stuart Douglas 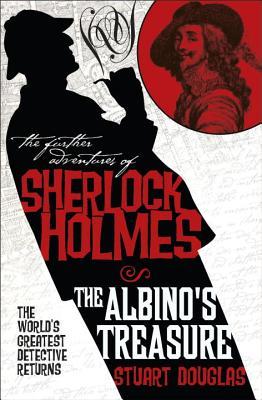 This week I'm spotlighting The Further Adventures of Sherlock Holmes: The Albino's Treasure by Stuart Douglas.  I saw this sitting on the new items shelf at the library when I was returning some items.  I wasn't planning on checking anything out, but Sherlock called my name and I just couldn't resist.  It sounds like it will be great based on the summary and these two snippets!

Throughout my long acquaintance with Sherlock Holmes, it was my practice to present to my friend a copy of my notes on any case of particular sensitivity.  Generally, Holmes would glance over the freshly written adventure with barely concealed irritation, mutter some unflattering remark, and indicate that I could do with it as I wished.  Occasionally, however, he would frown and showing a sudden interest, quickly read the entire manuscript.  'I think,' he would say, in due course, 'that this particular case would be best kept between ourselves for the moment.'  And with that he would disappear into his room, my piece for The Strand in his hand - and it would be consigned to the tin box he kept there, never to be seen again.

The door was ajar, so I knocked and entered.  To my surprise, sitting across the desk from Petrie with his back to me was the unmistakable figure of Sherlock Holmes.  He was dressed not in the near rags in which I had last seen him, but in his more usual gentleman's attire.  Without turning in his seat, he said 'Good morning, Watson.'

'Holmes!  What are you doing here?'

'I came to find you, of course.  I am delighted that your walk here has done you such good.'

I admit to a degree of pique at Holmes's airy greeting, and decided to avoid giving him the satisfaction of explaining how he could have known that I had walked from Baker Street to the Gallery.