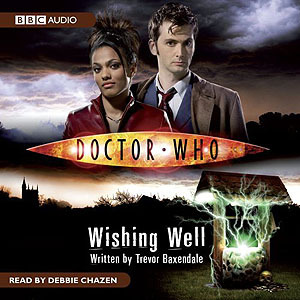 The old seemingly empty well is a bit of tourist attraction in the village partly due to the legend of lost treasure surrounding it. Turns out that what's actually going on with the well is much more sinister and dangerous. No one wants to listen to the Doctor's and Martha's warnings, but soon they'll wish they had.

I love watching Doctor Who and I've enjoyed the few tie-in books that I've read as well. In this case, Baxendale gets the tone and feel of the series and characters, especially for the Doctor and Martha. I listened to the abridged audiobook production, which did make me wonder what was edited out. The narrator for Wishing Well is Debbie Chazen and she does a great interpretation of Martha. At points, I forgot I wasn't listening to Freema Agyeman, but the actress who played Foon Van Hoff in Voyage of the Damned.