Like most, Wade Watts spends pretty much all of his waking hours in the OASIS, an entire virtual universe that let's you be whatever you want. Like most, he also hopes to win the ultimate OASIS lottery - he wants to discover James Halliday's Easter Egg which offers a huge fortune and a lot of power. Since Halliday's death five years ago no one has made any progress in the egg hunt. The hunt is based in Halliday's, the creator of the OASIS's, favorite 1980s pop culture from video games, movies, and music. Wade has dedicated years of his life to devouring these favorites and committing them to memory in case they could come in handy in the hunt. Then out of the blue, Wade stumbles upon the first puzzle of the first challenge of three that comprise the hunt, and now everyone's eyes are on him (or his avatar's) and his next move. He'll have to watch his back in both the real world and the OASIS because some players are willing go to any lengths to win, even commit murder.

Wow! That was quite a ride! Thank you, Mr. Cline, for writing a book that I'm sure will go down as one of my all time favorite books. I don't know why I've put off Ready Player One for so long - I suppose I didn't want to be disappointed by such a well loved book. Luckily, though, it absolutely lives up to all of the hype. Although, I don't play a lot of video games, let alone ones from the 80s, I was absolutely hooked and able to keep up with ease. Cline is a brilliant storyteller and his world building skills are astounding. Plus, his cast of characters could practically step off the page, especially Wade and Aech. Overall, this book is absolutely epic, but don't just take my word for it. If you haven't read it yet, honestly, what are you waiting for? It's so much fun! If you like Neal Stephenson, Andy Weir, Terry Pratchett, Orson Scott Card, and Neil Gaiman, you just might love this novel just as much as me. I'm really excited for both the Ready Player One movie adaptation and Ernest Cline's Armada. 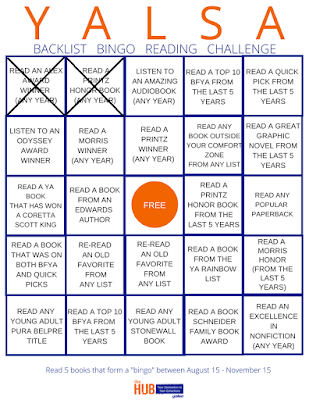 I read this novel as a part of YALSA's Backlist Bingo Reading Challenge and it fulfilled the Alex Award winner from any year option.  I have completed 2 of 5 books for the challenge so far, and I have until November 15th to finish my final three picks.