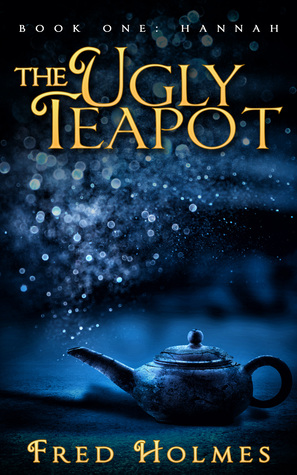 This week I'm spotlighting my current Kindle read, which I received free from the author in exchange for an honest review, is The Ugly Teapot, Book One: Hannah by Fred Holmes.  So far I'm about five percent through it, but it's very interesting so far.  This YA novel follows fourteen-year-old Hannah, the daughter of a photographer who would travel all over the world, often to dangerous locations for his work.  To help set her mind at ease, he would always bring her presents back, things that he said had "magical" powers - the Seal of Solomon, the Ring of Gyes, even Aladdin's Lamp.  Of all of them, the Lamp looked the most unbelievable since it resembled an ugly teapot, but her father assured her of it's powers and made her promise to save her three wishes for something good.  Then six months later her father got killed while on assignment in Baghdad.  On the day of his funeral, she did something she never thought she'd do, she took out that ugly teapot and gave it a rub.

Hannah Bradbury opened her eyes, feeling forty, not fourteen.  Every part of her ached: head, stomach, neck, back - which was weird because she had felt perfectly fine two seconds ago.  Plus now she was freezing.  That part, at least, made some sense, for it was cold outside and she was lying next to her cupola window.

But the weird part? --the seriously bizarre, mind-blowing part? --two seconds ago she had been lying in her bed across the room.

"I like this.  It is very invigorating to speak to a girl so intimately.  Yes, I do like our conversation together.  Do you?"

This week I'm also taking part in a brand new linkup called 50/50 Friday, which is hosted by Carrie @ The Butterfly Reader and Laura @ Blue Eye Books.  Every week they'll have a new topic featuring two sides of the same coin - this week for example the topic is Underrated book/ Overrated book.  For this topic, I'm actually going to go with the same author: Rick Yancey.

The 5th Wave - As much as I enjoyed this book and it's sequel (still haven't had the chance to pick up the finale yet), I'll have to admit that looking back it's a bit overhyped and overrated, at least in comparison to -

The Monstrumologist - This is the first book in my favorite four book series by the Rick Yancey (it concluded the same year that the first 5th Wave book was released).  It's an addicting gothic horror fantasy novel that for whatever reason never got anywhere near the attention it deserved.  If you're looking for the perfect Halloween read, you should definitely try The Monstrumologist!