Welcome to my leg of the Illusion (Heirs of Watson Island #3) by Martina Boone blog tour, hosted by Rockstar Book Tours!  Below you will find the details and summary of the book, the details and summary of Compulsion, the first book in the Heirs of Watson Island series, my review of Compulsion, an about the author, Martina Boone, a giveaway, and the blog tour schedule.  Thanks for visiting my stop on the Illusion Blog Tour! 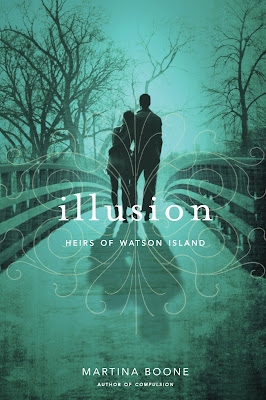 Barrie must rescue her beloved and her family from evil spirits in the masterful conclusion to the Heirs of Watson Island trilogy.

Caged by secrets all around her and haunted by mistakes that have estranged her from Eight Beaufort, Barrie Watson is desperate to break the curse that puts her family in danger—without breaking the beautiful magic that protects Watson’s Landing. To do that, she must heal the rifts that have split the families of the island apart for three hundred years, unravel the mystery of the Fire Carrier and the spirits he guards, and take control of forces so deadly and awe-inspiring they threaten to overwhelm her.

With the spirits that cursed Watson Island centuries ago awake and more dangerous than ever, she finds an unlikely ally in the haunting and enigmatic Obadiah, whose motivations and power she still can’t read—or trust. His help comes at a price, however, plunging Barrie into a deadly maze of magic and wonder, mystery and intrigue that leads through history to places she never imagined she could go. 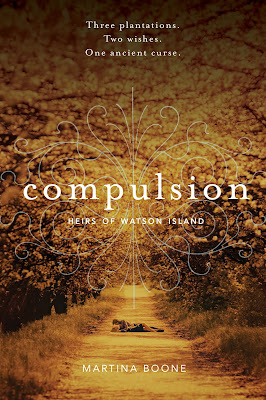 All her life, Barrie Watson has been a virtual prisoner in the house where she lives with her shut-in mother. When her mother dies, Barrie promises to put some mileage on her stiletto heels. But she finds a new kind of prison at her aunt’s South Carolina plantation instead—a prison guarded by an ancient spirit who long ago cursed one of the three founding families of Watson Island and gave the others magical gifts that became compulsions.

Stuck with the ghosts of a generations-old feud and hunted by forces she cannot see, Barrie must find a way to break free of the family legacy. With the help of sun-kissed Eight Beaufort, who knows what Barrie wants before she knows herself, the last Watson heir starts to unravel her family's twisted secrets. What she finds is dangerous: a love she never expected, a river that turns to fire at midnight, a gorgeous cousin who isn't what she seems, and very real enemies who want both Eight and Barrie dead.

Compulsion by Martina Boone is YA Southern Gothic Paranormal Romance done right.  It has so much to like about it from beautiful prose, intriguing characters, family legacies in the form of curses and gifts, an atmospheric setting, a solid mystery, and a swoon-worthy book boyfriend.  I've seen it recommended for fans of Beautiful Creatures by Kami Garcia and Margaret Stohl,  While it reminds me a good deal of that novel, I actually enjoyed Compulsion quite a bit more.

Boone expertly builds an incredibly atmospheric world for her cast of characters to inhabit with Watson Island, South Carolina.  I loved learning about the historical elements of the Island and how the three families at the heart of the story all tie together.  As for our main cast, everyone is well-developed and fully fleshed out.  Barrie is a character that I could relate to fairly well - she's quite persistent as she tries to work out the mysteries surrounding everything.  Although, she seen and faced quite a few horrible things, she never feels sorry for herself as she focuses on working through it all - and I could admire that.  Eight (aka Charles Beaufort VIII) is very swoon-worthy - and I rarely if ever say that at all - as a real southern gentlemen.  Although,  their relationship borders very close to instalove, but luckily it's handled fairly well.  Eight has quite a few admirable qualities.  He's very kind and considerate, plus he's not afraid to call Barrie out when he has to.

Overall, I highly recommend this slow-burn YA Southern Gothic novel.  The paranormal elements and mystery surrounding the families really had me hooked from the very beginning.  If you're a fan of The Caster Chronicles, you will definitely want to try The Heirs of Watson Island trilogy by Martina Boone.  I can't wait to continue on to both Persuasion and Illusion, the upcoming conclusion of the series. 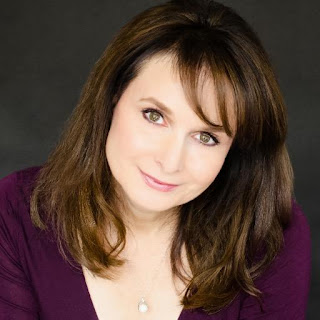 Martina Boone was born in Prague and spoke several languages before learning English. She fell in love with words and never stopped delighting in them. She’s the author of SIBA Book Award nominated Compulsion, book one in the romantic Southern Gothic trilogy, the Heirs of Watson Island, which was an Okra Pick by the Southern Independent Bookstores Alliance, a Kansas State Reading Circle selection, a Goodreads Best Book of the Month and YA Best Book of the Month, and an RT Magazine Best of 2014 Editor’s Pick. The second book in the trilogy, Persuasion, will be published in October 2015.

She’s also the founder of AdventuresInYAPublishing.com, a three-time Writer’s Digest 101 Best Websites for Writers site, the CompulsionForReading.com book drive campaign for underfunded schools and libraries, and YASeriesInsiders.com, a site devoted to the discovery and celebration of young adult literature and encouraging literacy through YA series. She is also a founder and permanent mentor at 1st5PagesWritingWorkshop.com, helping to shepherd aspiring writers into the publication process and help them find the right starting point for their novels in progress, Locally in her home state of Virginia, she is on the board of the Literacy Council of Northern Virginia, helping to promote literacy and adult education initiatives.

She lives with her husband, children, and a lopsided cat, she enjoys writing contemporary fantasy set in the kinds of magical places she’d love to visit. When she isn’t writing, she’s addicted to travel, horses, skiing, chocolate flavored tea, and anything with Nutella on it.

2 winners will receive hardcover sets of COMPULSION, PERSUASION, & ILLUSION, US Only.