Everything, Everything by Nicola Yoon - Review 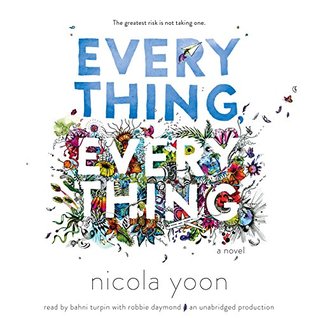 Madeline has SCID and that means she's pretty much allergic to everything and hasn't left her own home in forever. Aside from her mom, her primary doctor, the only person she can interact with in person is Carla, her nurse. Otherwise, she goes to school and lives her life online (she's a book blogger!) - until a new family moves in next door. Their teenage son, Olly, is super cute, and the more she gets to know him the more she realizes that she would be willing to do anything for him.

Everything, Everything by Nicola Yoon is an intriguing debut novel yet predictable story of young (and stupid, in a well-meaning way) love. Madeline has SCID, aka "bubble boy syndrome", and can't leave her own home for her own safety. When Olly, the cute boy next door, moves in, she also begins to suffer pretty heavily from instalove. That said I really enjoyed getting into Madeline and Olly's heads as they get to know one another online and seeing just how much they push each other to do more with the lives they've been given.

Maybe I'm just getting old, but (at least at first) I kind of agreed more with her mother more. She's just trying to keep her daughter safe, and still happy, but Madeline wants to do things and go places with Olly that will obviously endanger her life. His influence really has an effect on her mental faculties. That's not to say that Olly isn't a good guy, he isn't really pushing her into anything and he always tries to keep her well-being in mind. Like I said, the story is quite predictable until the plot twist at the end which made me do a complete 180 on my opinions of Madeline's mother. (view spoiler)[Basically, Madeline's never been sick. Her mother's just been keeping her daughter prisoner in her own home so she "won't get hurt" after husband and son died in an accident shortly after Madeline was born. (hide spoiler)] That plot twist alone made me bump this up from a two star read to a three star read. Also, I listened to this novel on audiobook and the two person narration is excellently done.

Overall, Nicola Yoon's debut, Everything, Everything, is a well-written yet predictable contemporary right up until the roller coaster of an ending. If you like The Fault in Our Stars by John Green and We Were Liars by E. Lockhart, you may also like this novel. I'm definitely interested in trying Nicola Yoon's newest release, The Sun Is Also A Star.