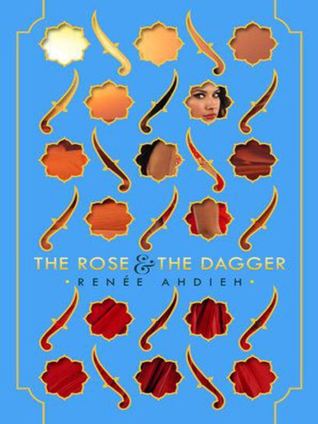 Once Shahrzad believed Khalid, the Caliph of Khorasan, to be a monster, but now she knows that there is more to his story - he's a cursed man haunted by grief. She should be happy that she has been reunited with her family who has taken refuge with Khalid's enemies. Tariq, her first love, is dead set on destroying Khalid's empire. Shahrzad finds herself caught between her family and friends and her husband, but she will not become a pawn. Shahrzad has a plan to reunite with her husband and break his curse. First, she'll need to come to terms with the magical powers that she has inherited from her father, Jahandar.

Renee Ahdieh's The Rose & the Dagger, the sequel to last year's The Wrath & the Dawn, takes up about a week after the conclusion of the first novel. It jumps right into the story with our two leads, Shahrzad and Khalid, separated and facing what seems to be insurmountable odds in the face of an impending war. Khalid and Shahrzad are the best part of the previous novel and they're apart for nearly the first fifty percent of this story. We see a little of Khalid, but we hear more about him. Instead, we see Tariq quite a bit more - more than I would have liked. Initially, I liked Tariq when he was originally introduced, but he quickly began to grate on my nerves. And, that's pretty much the case here. He doesn't want to listen to Shahrzad at all and he's pretty single minded in his mission to destroy Khalid. If hostile (almost) love triangles aren't your thing, this may get old quickly.

Luckily, though, the second half of the novel really picks up. Primarily, Shahrzad and Khalid are reunited, we get to see more of the Shahrzad's magical abilities, and all sorts of twists, turns, and betrayals. Needless to say, I was pleased to see the two of them sharing page time again. I was also pleased to learn more about Shahrzad's magic, especially how it's connected to that rug. My favorite scene has to be their "magic carpet ride", which is essentially a genderswapped version of "A Whole New World" from Aladdin. Even so, I wish we got to see a little more of her building up her newfound skills. Finally, I really enjoyed keeping up with the non-stop twists, some of which were truly surprising, which especially ramp up the closer we get to the grand finale.

Finally, I just want to note that I listened to this novel on audiobook which is narrated by Ariana Delwari. The narrator can really make or break the story, and here I can honestly say that I didn't really like the production. There was too little variation in character voices, overlong pauses, and now I have no clue if I was pronouncing anything right from the first book. Basically, the narrator didn't make me want to continue just by listening to the strength of her performance (which really reminded me of someone being called on to read aloud in English class) - that was all on the strength of Ahdieh's prose. For me, the narrator took the novel down from a solid four stars to only three.

Overall, The Rose & the Dagger, the final novel in Renee Ahdieh's The Wrath & the Dawn duology, is a very good conclusion, especially once you make it beyond the slow set up for the second half of the novel. Her writing as a whole, character development, and world building are all excellent. Although, I listened to the audiobook, I can definitely say that it isn't worth it to stick with this narrator for nearly twelve hours, but just on the strength of Ahdieh's storytelling skills I can highly recommend this novel in print, if it's anything like the previous installment. If you enjoyed The Wrath & the Dawn, you need to see how it all ends in The Rose & the Dagger. If you're looking to start the series, I expect you'll enjoy Renee Ahdieh if you have also liked Rebel of the Sandd by Alwyn Hamilton. I'm highly anticipating Ahdieh's next release, Flame in the Mist.

I listened to this audiobook from September 28 - October 3, 2016 and my review is also on Goodreads.