I've read a lot about Victoria Woodhull, the first woman to run for President of the United States in 1872 (as well as many other firsts), over the years.  She came from poor, rural Ohio roots and was far, far ahead of her time.  It's an understatement to say that she was a larger-than-life figure.  Unfortunately due to history she has been mostly forgotten, but thanks to Hillary Clinton's presidential campaign and nomination she is starting to be remembered (and she's putting Homer, Ohio, her hometown, back on the map).  The two books I'm reviewing below, Crossing Swords: Mary Baker Eddy vs. Victoria Claflin Woodhull and the Battle for the Soul of Marriage (nonfiction) and Outrageous: The Victoria Woodhull Saga, Volume One: Rise to Riches (fiction) are two interesting entry points to her fascinating life and work. 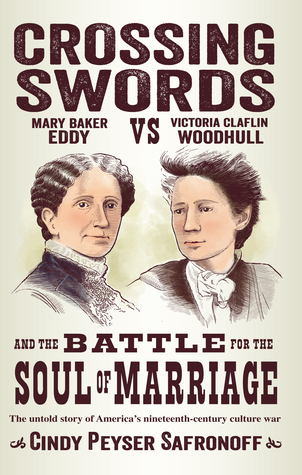 This nonfiction book discusses the different philosophies of Mary Baker Eddy, the founder of the Christian Science movement, and Victoria Woodhull, the first woman to run for President of the United States in 1872, in regards to marriage, love, and sexuality. The two women were on completely opposite ends of the women's rights movement with Eddy staunchly defending the sanctity of marriage and Woodhull advocating for free love. Free love is a very modern idea in which women (and men) should be able to love, and/or marry, who they choose and when they choose that also includes marriage and divorce laws, women's rights within marriage, health and reproductive rights, and children's care and wellbeing. You might be able to see how quickly and easily that could be taken the wrong way, especially in those days and with a name like "free love". Safronoff discusses the free love movement by exploring Eddy's and Woodhull's totally different backgrounds and careers, as well as their own words.

Primarily, I found myself interested in picking up this book because Victoria Woodhull is such a fascinating, larger-than-life woman who lived a hundred years ahead of her time. I'm glad to see her getting remembered today after being mostly written out of history (I'm looking at you Susan B. Anthony and Elizabeth Cady Stanton!). The author manages to make her story relevant and interesting, especially considering Hillary Clinton was the first woman be nominated by a major political party in her bid for the White House in 2016. However, rather than both of these intriguing women being evenly presented, Eddy definitely gets more page time - the author states her bias towards Eddy in the preface and you can definitely get a sense of throughout. Overall, though, if you're interested in either of these influential women, I recommend trying this work of nonfiction as a good entry point into their lives and the movements they supported. 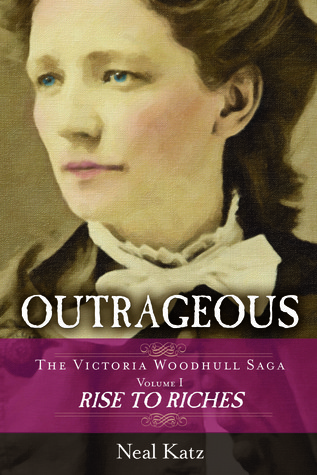 If you're interested in the life of Victoria Woodhull, the first woman to run for president of the United States in 1872, this fictionalized account (with a touch of magical realism due to the inclusion of her spirit guide and work as a spiritualist) of her life is a must read. This first volume is actually told from her perspective and covers her childhood all the way up to 1870 when she announces her intention to run for the highest office. There's a lot that happens to her and that this larger than life woman manages to accomplish in her first 32 years including going from having absolutely nothing and a crappy family life to working with Cornelius Vanderbilt, one of the richest men in the country, and becoming the first female stockbroker (along with her sister, Tennessee) on Wall Street. Victoria Woodhull was an absolutely fascinating figure in the women's rights and free love movement that is just starting to be rediscovered after being largely forgotten. After the 2016 election, it's a great time to learn about the first woman to run for president under the Equal Rights Party. I'm really looking forward to continuing Neal Katz's take on her life story in Volume 2, Scandalous: Fame, Infamy, and Paradise Lost.