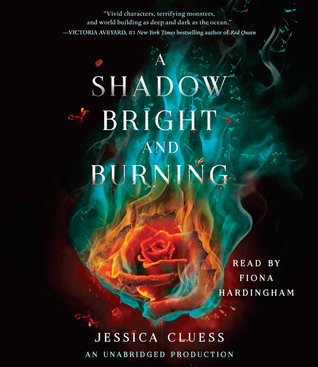 Henrietta Howel can catch fire, but she's had to keep that ability secret at the girls school where she works. That is until she is forced to reveal her power to save a friend's life. Instead of being executed as a witch, she's actually invited to train to become a royal sorcerer. The royal sorcerers claim that she is prophesied to defeat the Ancients, the demons terrorizing the world over. She and her fellow sorcerer trainees will train to defeat the demons and test each others powers. However, Henrietta isn't really the chosen one and she finds herself in the middle of a dangerous game with sorcerers that have plenty to hide.

A Shadow Bright and Burning by Jessica Cluess was one of my most highly anticipated reads of 2016, and I'm glad I finally had the opportunity to listen to it on audiobook. The narration as performed by Fiona Hardingham is excellent - she really helps bring Henrietta's story to life. The story is engrossing. I loved learning about this alternate Victorian era featuring magicians, witches, and sorcerers (all are different types of magic users) - the world-building is great, if a little rushed at the beginning. One of my favorite aspects about this YA fantasy, a genre where you can hardly turn around without bumping into a chosen one, is that Henrietta learns that she is not actually the chosen one that the prophecy mentions. The prophecy in this story refers to a female sorcerer that will defeat the demons - let's just say that female sorcerers aren't exactly unheard of, they're just more rare than say female witches (which is the type of magic user who let the demons loose in the first place). By the way, the last really well-known female sorcerer in Henrietta's world was Joan of Arc. There is also a bit of a romance in the story, but it doesn't overwhelm the story at all - that being said Rook's my favorite.

Overall, Jess Cluess's debut, A Shadow Bright and Burning, is an engaging read and comes highly recommended from me. If you enjoy YA historical fantasy (steampunk or not - this one isn't), you'll definitely want to give this 2016 release a try. Like The Crown's Game by Evelyn Skye, The Dark Days Club by Alison Goodman, and These Vicious Masks by Tarun Shanker and Kelly Zekas? Then you might also enjoy this first book in the new Kingdom on Fire series. I'm really looking forward to the sequel, A Poison Dark and Drowning!

I listened to this audiobook from January 27 - February 1, 2017 and my review is also on Goodreads.