And the Trees Crept In by Dawn Kurtagich - Review 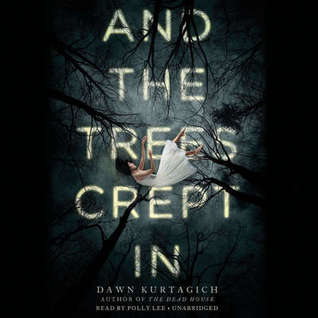 As soon as Silla and Nori get to their aunt's manor after escaping their abusive father in London, it's clear the place is cursed what with the eerie creaking of the house and the unsettling silence of the forest. There are plenty of questions that Silla realizes she just can't ignore - who's that stranger in the woods, who's the man only Nori can see, and why do the trees appear to be slowly getting closer to the manor?

As soon as I heard Dawn Kurtagich was releasing a new novel, I couldn't wait to see what she'd do just based on my love of her incredibly creepy debut, The Dead House. Luckily her sophomore effort really lived up to the hype! This time, though, I listened to the audiobook rather than reading the print edition, which really intrigued me as I'd heard wonderful things about her debut on audio. As it turns out the audiobook production of And the Trees Crept In is one of the best I've had the opportunity to hear - and it's one of the creepiest! Don't listen to this alone in a dark room! I'm not kidding! It's super intense - I felt like biting my nails to the quick and screaming at the same time for somewhere around 50% of the novel. Polly Lee easily makes the list of my favorite narrators with this singular performance. Plus, I can't forget to mention that Dawn Kurtagich does a marvelous job of creating an entirely horrifying and claustrophobic world for the incredibly well-drawn sisters, Silla and Nori, to inhabit.

Anyway, don't just take my word for it - And the Trees Crept In needs to be experienced. Just don't read it in the dark, and no where too quiet for that matter. If you enjoyed the atmosphere of The Others, Shutter Island, and Kurtagich's debut release called The Dead House, I have a feeling that you'll love And the Trees Crept In (aka The Creeper Man). I'm looking forward to whatever else Dawn Kurtagich does in the future!