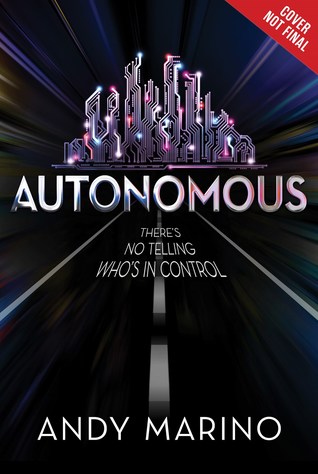 After winning a contest which just about killed him, William has the opportunity to to take an all-expenses paid cross country road trip in Autonomous, a luxurious futuristic driverless car that knows where you want to go before you do. Better yet, he even gets to take three friends along for the ride. For William this will be the perfect last hurrah before he and his friends go their separate ways after high school graduation. Autonomous, though, has much greater capabilities than even they realize - it can sync with its passengers by downloading all of their social media and digital history. All of that information has been used to program their customized itinerary on the way to their final destination, but it will also reveal things that they all would prefer stay hidden. #WorthIt

Based on the description of Andy Marino's Autonomous, this was going to be a funny road trip book featuring a great group of friends with plenty of action and thrills. It's also rated as appropriate for ages 14+. I've never read the author's work before, so I didn't know exactly what to expect in terms of style but the description really caught my attention. In the end, though, this is one of those where I completely preferred the idea presented in the description to the actual execution of the story. I was very close to DNF'ing it, but I powered my way through hoping that it would improve - unfortunately it never really did.

First things first, this is not appropriate for 14 year olds, unless your 14 year old is very mature for their age. Based on the content - cursing, drugs, drinking, sex, self-harm, and suicide, etc. - this is definitely for older teens. Usually, I don't really discuss this aspect in these terms, but that was at the top of the NetGalley description, so I must mention just how surprised I was at the content. Second, I was expecting to laugh or at least chuckle once during my reading experience, but it isn't funny - at all. I don't know if I missed something, but I didn't come away from this book thinking it's a funny road trip novel at all. I'd say it actually borders up against horror/ thriller more. Maybe I've read and watched too much about technology and/ or vehicles gone bad (Christine, The Car, Maximum Overdrive, and 2001: A Space Odyssey among others). The more I read, the less I would have been disappointed if the story had gone that route with Autonomous (aka Otto) - too bad that aspect was never really explored although there are a handful of moments.

Third, in regards to the cast of characters, I was expecting to love getting to know this group of friends, but that didn't happen. I didn't like anyone and they all grated on my nerves throughout. Christina is the only halfway decent character out of everyone in the novel (everyone else is just irritating or flat). Her character definitely deserved much better than she got in this story. I bet I was inadvertently grinding my teeth down while reading about the rest of our cast. The prevalent social media stuff was also exasperating - and that's coming from someone who tweets, blogs, pins, and the like regularly. I usually like seeing a bit of that kind of thing in YA contemporary (which this also brushes up against) because that can make it feel very current and now. Maybe, though, my irritation is connected to the characters who push it the most (ie: not Christina) or because it just feels too forced in this case - at least it does touch on some of the more creepy aspects of social media when it comes to the driverless car itself but not nearly enough.

Finally, I was really let down by Autonomous by Andy Marino - it was one of those reading experiences where I actually preferred concept to the final product. Christina, the use of social media, the driverless car, the elements of horror/ thriller, the official description - there's so much potential, but it just stalled out for me. I nearly gave up on this novel, but I kept going in hopes that it would eventually improve. I doubt this story will age well, and I expect it will date quickly. It's going for #relatable, but it never hits the mark. Reader beware: Ages 16+ are recommended.

Thanks to NetGalley for giving me the opportunity to try this ARC.