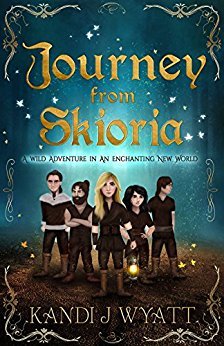 I received a free ecopy of this middle grade fantasy story from Aurora Publicity and Kandi J. Wyatt in exchange for an honest review.

Nine year-old Tania has separated from her family after a boating accident. She washes ashore in an unfamiliar woodland area that is populated by creatures called the Skiorians, Terrans, and Avarians. If she ever wants to see her family again, she and her new allies are going to have to trek for days through the magical and dangerous forest on an adventure of a lifetime.

Journey from Skioria by Kandi J. Wyatt is a fun younger MG adventure novel that would be wonderful for fans of The Chronicles of Narnia and Lord of the Rings. It's a short, quick read with good world-building. I liked getting to know the world that Tania has just been flung into after that boating mishap. Unfortunately, I didn't feel all that connected to our cast of characters. The writing is well done, but I still felt disconnected from Tania. I think part of that comes from the fact that we don't get to meet Tania's parents in the very beginning. I would definitely have preferred to get a good sense of her relationship with her mother and father from the start. Although, this is Tania's story, I would have also preferred to see a little more of her parents when she get back to their side - that they had done more to locate their daughter after she was gone for so long.

Overall, if you'd like to try a good MG adventure fantasy in the vein of classics, you may want to try Journey to Skioria. I didn't enjoy it quite as much as I was hoping, but it's still worth trying. It's goes quickly and you may enjoy Wyatt's world-building. Thanks again to Aurora Publicity and the author!