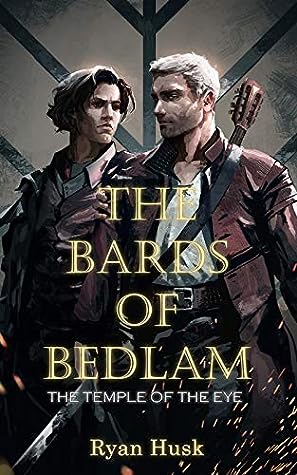 I received an ecopy from Reedsy in exchange for an honest review.

Cael and Sid are two rogues and musicians with a knack for trouble and solving crimes. In a fantasy world of medieval charm, Cael uses logic and science to uncover murders and mayhem, while Sid, his trusty friend, sidekick, troubadour and doctor, accompanies him, as long as there is a pretty lady or coin involved. Follow their exploits through the rough city of Bedlam, as the motley group of musicians pit themselves and their friends against a beast-worshiping cult.

The Temple of the Eye by Ryan Husk is quite a pleasant surprise. I'm so glad I took the opportunity on this The Bards of Bedlam series opener via Reedsy Discovery. At the time I selected the novel for review, I was just coming down from watching The Witcher on Netflix and I think that's what inspired my choice since this story is led by friends Cael and Sid, two bards who have a talent for trouble and solving crimes as it turns out. All I really had to hear was bards solving crimes, probably since Jaskier was my favorite character from The Witcher (which I'm still just as excited about now since I've finally started in on the novels that act as the source material for that show). Anyway, all that said, I've got a couple of new favorite bards in my life with Cael and Sid in this book. What I love about the two characters is that there's more to them than what you would initially expect in regards to their type of character. Cael has a level head and keeps scientific principles and concepts in mind when he and his friend get pulled into a mystery, and Sid is also a doctor as well as being a troubadour. I really appreciated our two leads, especially Cael, but I wasn't all that interested much of the rest of the cast since I was so attached to our two bards. I do have a question about the pronunciation of Cael's name. I guessed that it was sounded a lot like Chaol from Throne of Glass by Sarah J. Maas. Finally, I just want to note that this fantasy mystery is fairly slow placed, but it's well worth the build up to the pay off and that Husk's world-building pretty good as Bedlam practically becomes a character in its own right.

Overall, The Temple of the Eye is a fun read and it's shows a lot of potential for future installments. I can't wait to see more of Cael and Sid's adventures in the future. Thank you again to Reedsy for this fantastic opportunity.


My review can also be found on Goodreads and Reedsy.